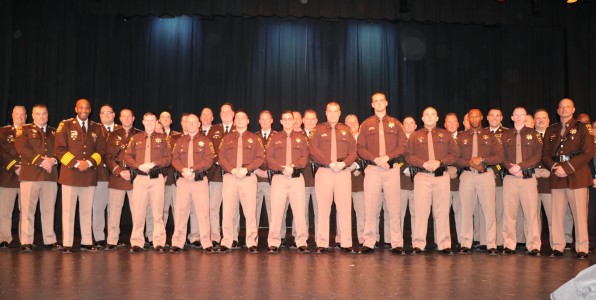 Charles County Sheriff Troy D. Berry is proud to announce nine new officers will join the Charles County Sheriff’s Office after their recent graduation from the Southern Maryland Criminal Justice Academy (SMCJA). The officers were among a total of 29 candidates – seven with Calvert County and thirteen with St. Mary’s County – who graduated on February 22. “It takes a great deal of perseverance and dedication to complete the Academy, and all of the graduates and their families should be very proud. We are thankful to our top-notch SMCJA staff who provided excellent training and instruction to the recruits to prepare them for the road ahead,” said Sheriff Berry.

Director of the SMCJA, F/Sgt. Keith Hicks, welcomed the graduates, their families and friends and spoke about the 26-week training program that started in August 2018 and included over 1,000 hours of instruction.

The Academy’s Board of Directors — Charles County Sheriff Troy D. Berry, St. Mary’s County Sheriff Timothy K. Cameron and Calvert County Sheriff Mike Evans — also spoke about the graduates’ new career and the difficulties and rewards each of them will encounter.