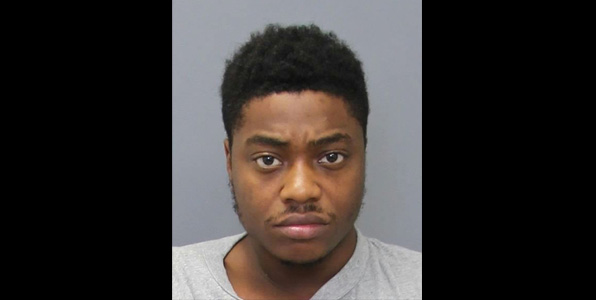 PATROL OFFICERS APPREHEND CARJACKING SUSPECT: On October 14 at approximately 5:29 p.m., officers responded to a hotel in the 11300 block of Days Court in Waldorf for the report of a carjacking involving a black sport utility vehicle. While en route to the hotel, officers were notified of another caller reporting that a woman attempted to flee a black Ford Explorer at the intersection of Crain Highway and Route 5, but a man got out of the vehicle, grabbed her and shoved her back into the vehicle. The caller followed the vehicle toward Acton Lane, where officers attempted to stop the vehicle. The woman in the vehicle put it in park and took the keys out of the ignition, causing the vehicle to stop abruptly and swerve off of the road. The suspect bailed out of the car, and after a short foot chase he was apprehended by PFC C. Clevenger and his K9 partner, Doc, PFC P. McPherson, PFC E. Scuderi, Officer J. Smith, PFC B. Kunz, and PFC W. Halt. The suspect was in possession of marijuana, US currency, and a scale, indicative of distribution.

Initial investigation revealed that the suspect and victim, who are in a relationship, got into an argument at the hotel. The suspect, Damonte Ramello Moton, 24, of Oxon Hill, then strangled the victim, assaulted her, stole her money and her cell phone and fled with her in the vehicle.  A witness who saw the altercation at the hotel made the initial call.

Moton was arrested and charged with carjacking, possession with the intent to distribute, first-degree assault, and false imprisonment. PFC B. Morrison investigated.

The Charles County Sheriff’s Office would like to remind victims of domestic violence that there are resources available to help. The Center for Abused Persons (CAP) provides a 24-hour crisis hotline and support services. Contact CAP at 301-645-3336 or visit www.centerforabusedpersonscharlescounty.org for more information.