Charles County Detention Center Director Brandon Foster, along with Sheriff Troy Berry and members of the CCSO and CCDC Command Staff, are proud to announce that Correctional Officer First Class Al Davis has been named the 2018 Correctional Officer of the Year. CFC Davis was presented his award in April.

CFC Davis began his career in Corrections in September of 2009, and he has been assigned to Transport and is currently serving in Custody and Security. CFC Davis was nominated for Officer of the Year by Sergeant Crystal Parum. 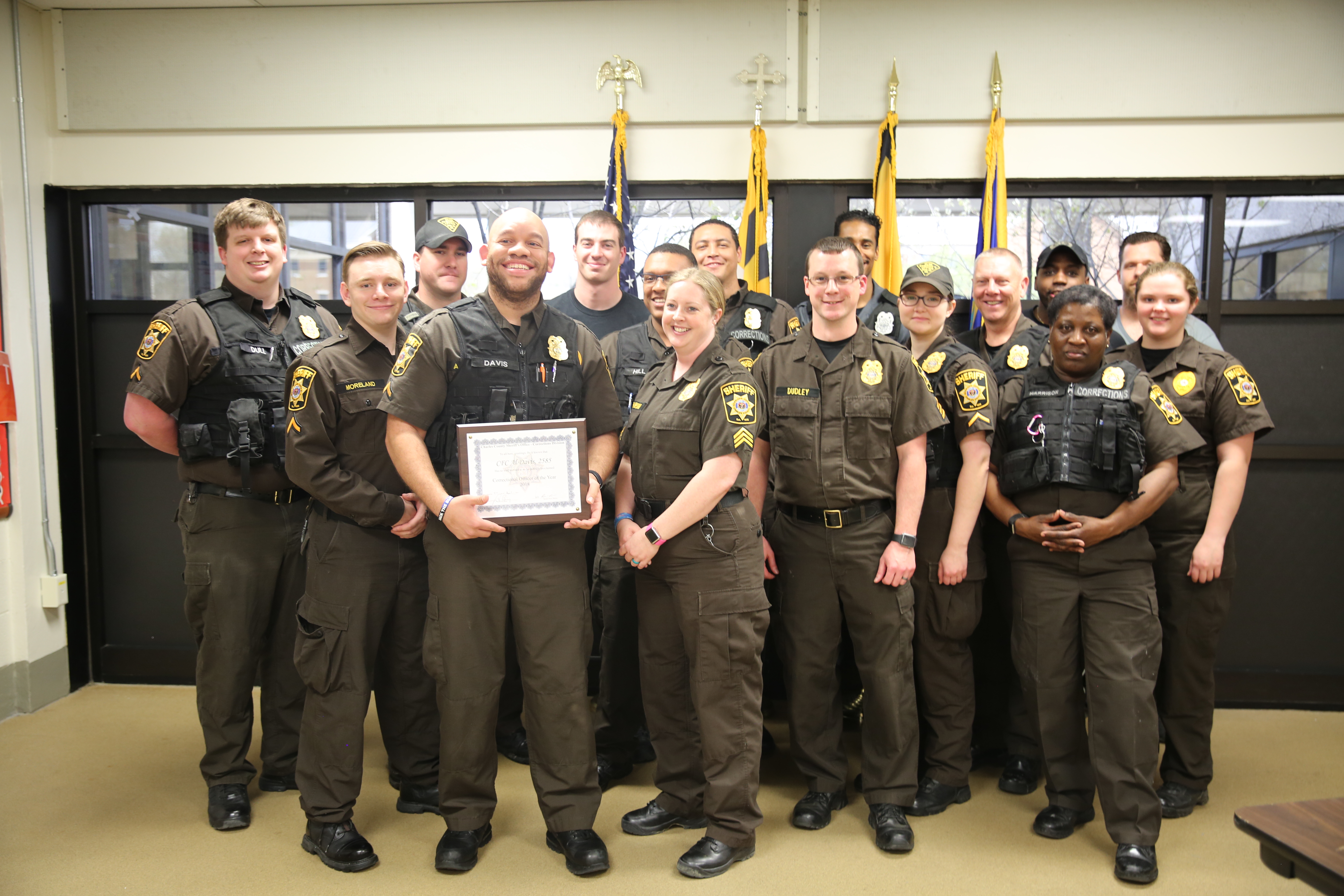 CFC Davis and his team, Custody and Security Team 3, after Davis received his award

“I am pleased to nominate CFC Al Davis for 2018 Officer of the Year,” Sgt. Parum wrote. “He has continued to strive to make not only the Corrections Division a better environment, but also our community. He conveys a favorable image for the Division and displays the utmost respect to everyone he encounters.”

CFC Davis is a team player and is always willing to step up to help his coworkers and the Agency. On numerous occasions he has worked overtime, including holidays, to help out his team. He volunteers as a recruiter to assist in finding qualified individuals who want to learn more about becoming a Correctional Officer, and has also served as a Field Training Officer. In September 2018 CFC Davis attended a week long Crisis Intervention Training. He consistently maintains his professional certifications, serves on the Security Enforcement Team and is an Executive Board Member of the Charles County Correctional Officers Association (CCCOA).

In addition to his commitment to the CCSO, Al is dedicated to bettering our community. In June 2018 he volunteered as a Camp Counselor for the Muscular Dystrophy Association Camp as he has done for the past several years. In July 2018 he became certified in Youth Protection Training, which registered him as an Explorer Advisor through the Boy Scouts of America. CFC Davis is an Advisor for the Explorer Post, which currently has approximately 60 members, and in July he took a group of 12 Explorers to Purdue University in Indiana for a National Championship after training for 9 months. CFC Davis has also helped the Charles County Children’s Aid Society, from volunteering at their Bingo Night to organizing the Annual Toy Drive to helping out at Christmas Connection.

“It is clear that CFC Davis is dedicated to his profession as well as to the community he lives in. He embodies CCSO PRIDE in all he does: professionalism, respect, integrity, duty and excellence,” said Sheriff Berry.

“I am honored to name CFC Davis the Correctional Officer of the Year for 2018,” said CCDC Director Brandon Foster. “He gives 110% and always with a smile on his face. His contributions are very deserving of this recognition.”