The holiday season often marks a time of reflection of the past year, and law enforcement is no different. As 2018, the 360th anniversary year for the CCSO, has come to a close, Sheriff Troy Berry and the Charles County Sheriff’s Office look back on the events of the last 12 months. For 2018, many successes stand out: crime in Charles County has decreased; employees were recognized for award-worthy work; new outreach efforts were made to educate the public on the dangers of heroin and opioids; several officers graduated from prestigious leadership and training programs; and we’ve continued to remain actively involved with our community and with our youth.

Decrease in Crime: Preliminary crime numbers show that in comparison with 2017, overall crime decreased by 2.5% in 2018. “Every person who works for the CCSO, from dispatchers and station clerks to patrol officers and detectives, from correctional officers to civilian employees, plays an important role in crime prevention. I’m very proud of the women and men of the CCSO and what they are able to accomplish when faced with an ever-increasing population,” said Sheriff Troy D. Berry. “While our work is never over, it is encouraging to see hard work reflected in the numbers.” The CCSO was again recognized this year by the Governor’s Office of Crime Control and Prevention for outstanding crime prevention programs.

Above and Beyond the Call of Duty: In early November, 65 CCSO employees were honored at a banquet for saving lives, bravery, superior field service, and going above and beyond in their 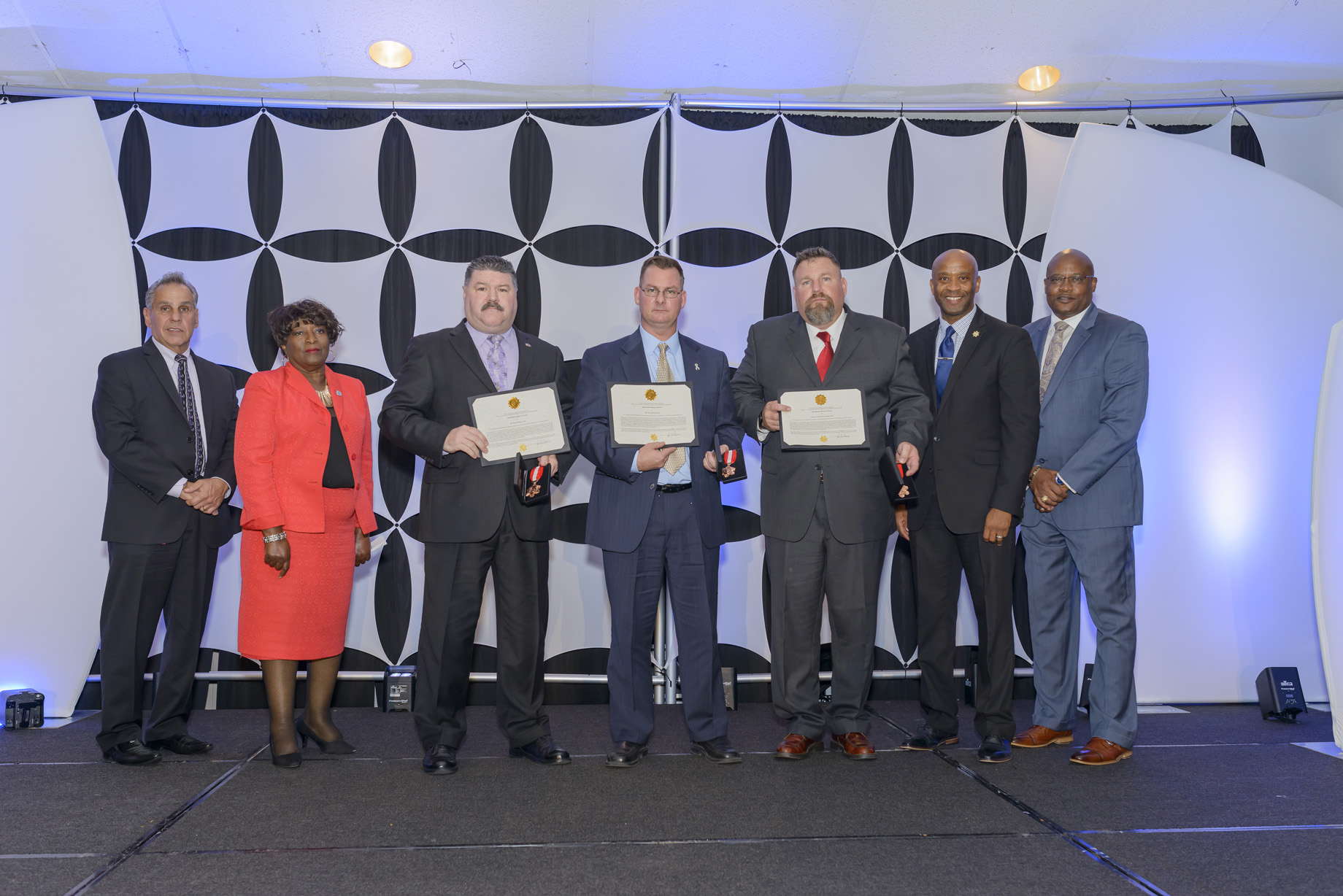 job duties. Of those award recipients, three officers received medals of valor, our highest honors. M/Cpl. John Freeman, PFC Michael Wagner, and PFC Michael Beall were awarded the Bronze Medal of Valor for their actions on February 21, 2018, which directly contributed to the capture of the killer of a police officer from a neighboring jurisdiction. There were also 25 retirees honored at the banquet, who served a combined 593 years at the Charles County Sheriff’s Office.

Officers also received accolades throughout the year from the CCSO and other organizations. PFC Andrew Coulby was named the 2017 Officer of the Year by the Sons of the American Legion Squadron 82 for his extraordinary bravery and courage when responding to the scene of a murder/suicide in March of 2017. Cpl. Justin Davis was recognized as the 2017 Correctional Officer of the Year as a result of his work ethic, initiative, and dedication to the Charles County Detention Center. Detective George Higgs received the Department of Justice Missing Children’s Child Protection Award recognizing his relentless work in the investigation of a child sexual predator and the identification of 42 child abuse 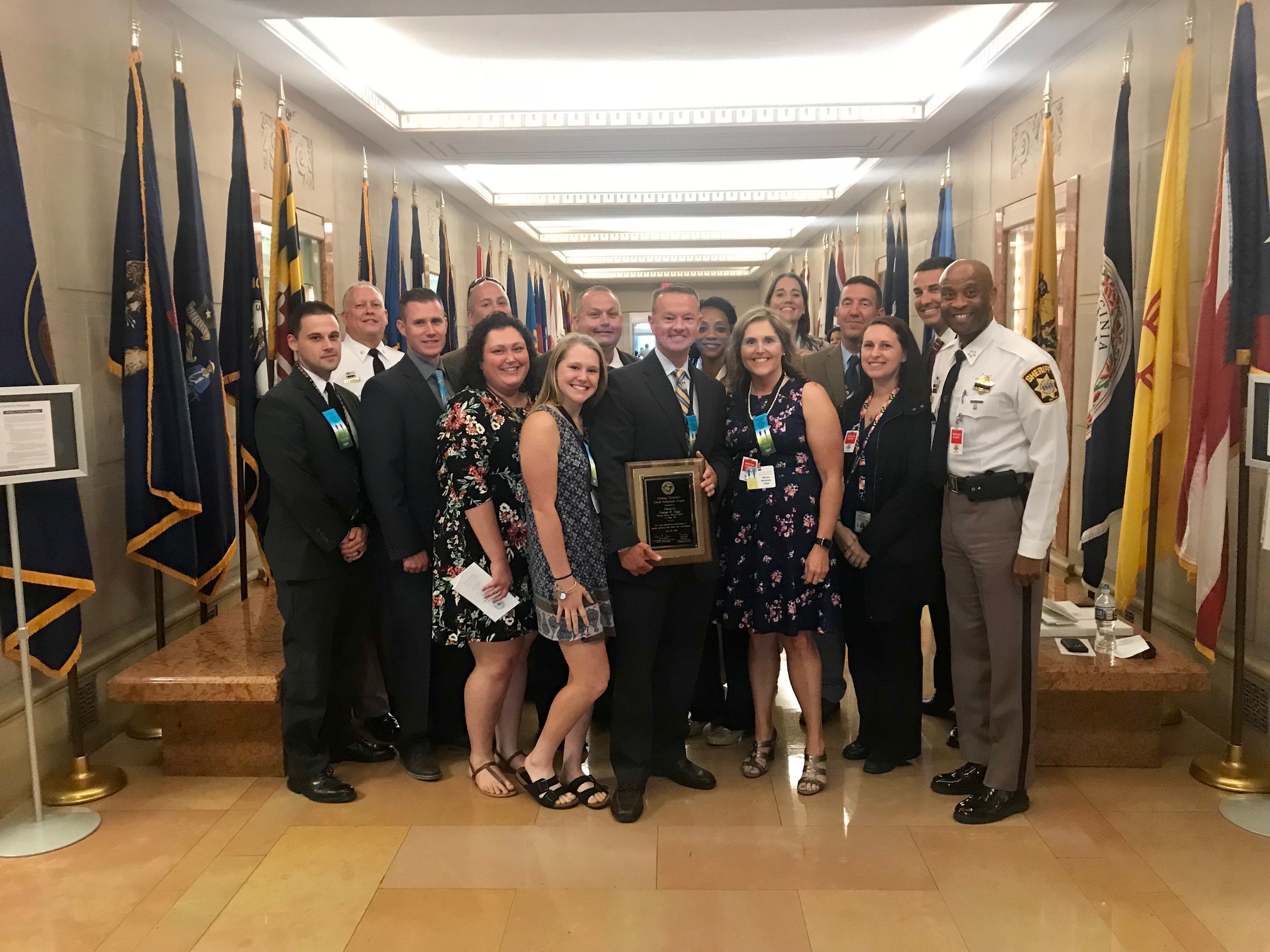 victims. Detective Higgs was also awarded the Meritorious Service Award by the CCSO in December for his work on this case. Sgt. Jon Burroughs, Pfc. Patrick McPherson, Cpl. Kris Syvertsen, and Cpl. Ray Brooks were honored at the Maryland Department of Transportation’s ADAPT (Aggressive Drivers Are Public Threats) Aggressive Driving Prevention Awards Luncheon. They received awards for their efforts in reducing aggressive driving on our roadways in 2018. In October, the Maryland Police & Correctional Training Commissions (MPCTC) held its 18th Annual Awards & Instructor’s Conference where Lt. Harry Ivers received an Academy Instructor of the Year Award and Sgt. John Arcadipane received a Non-Academy Instructor of the Year Award.

HOPE for the Heroin Epidemic: Opioid addiction is an epidemic affecting all parts of the country. While the number of overdoses continues to 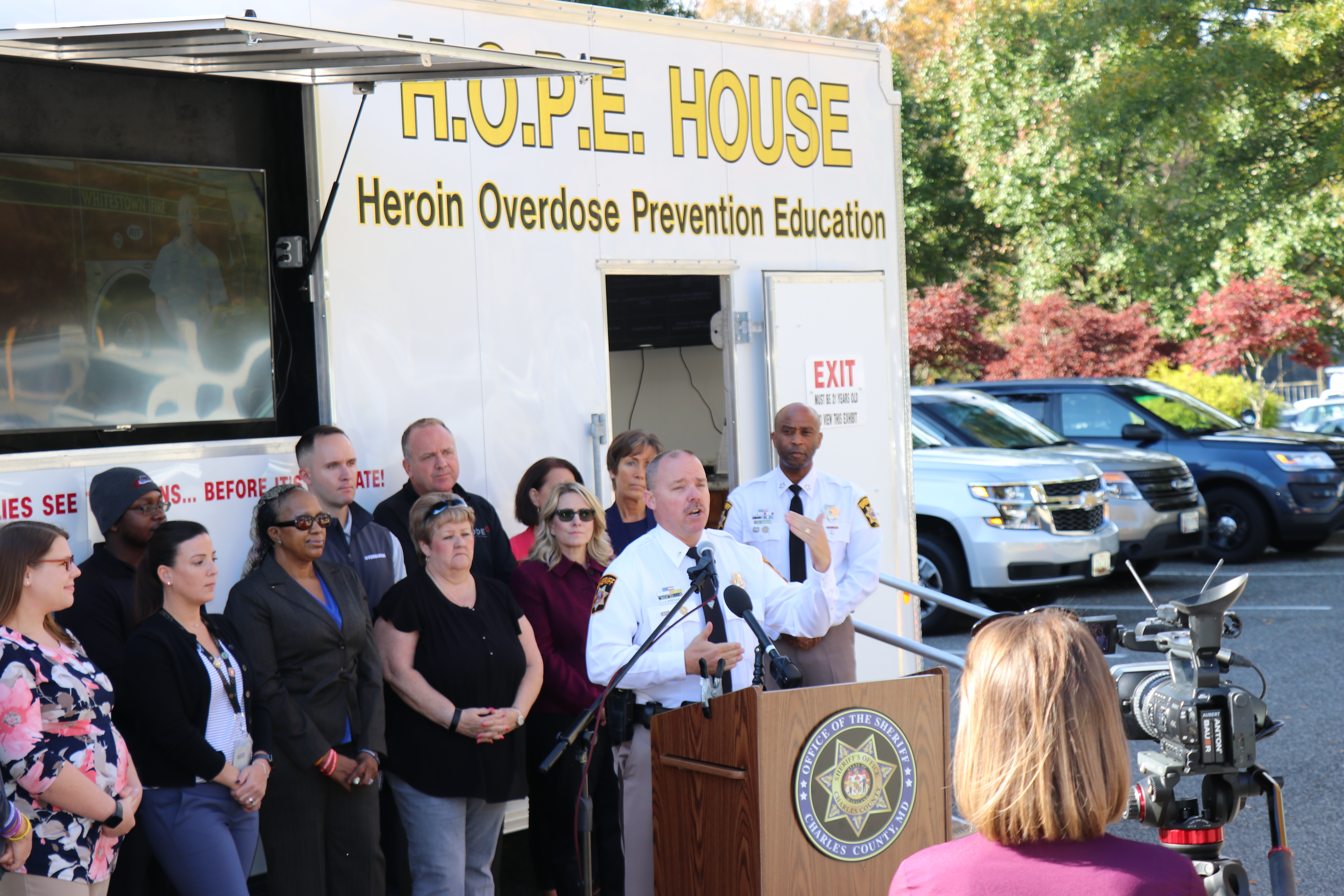 rise on a national level, the number of overdoses and fatalities linked to opioids saw a decrease in Charles County in 2018. Although it’s too early to determine if this will be a long-term trend, the agency is committed to prevention and education as part of its efforts to prevent abuse. As part of these efforts and by the hard work and dedication of many, the CCSO unveiled the HOPE (Heroin Overdose Prevention Education) trailer in the fall. This mobile educational tool was designed to raise awareness and inform parents of the warning signs related to drug abuse. The trailer – designed to resemble a teenager’s bedroom – offers parents the opportunity to see where teens are likely to hide drugs.

Major Achievements: In July, Sheriff Berry was pleased to announce the graduation of Lt. Jeffrey Wood (Shift Commander, Patrol Operations), Sgt. Jon Burroughs (Supervisor, Traffic Operations), Sgt. Scott Grove (Supervisor, Domestic Violence Unit), and Sgt. Caroline Baker (Supervisor, Patrol Operations) from Northwestern University’s Center for Public Safety School of Police Staff and Command, Session 438. The 10-week course is designed to prepare top and mid-level law enforcement managers and supervisors for senior agency positions. Students from Southern Maryland resided at the facility for the entirety of the school and earned 16 college credits for completing the course. More than 10,000 national and international officers have graduated from this program since its inception in 1983.

In December, Lt. Joseph Pratta graduated from the National FBI Academy. Less than 1 percent of the nation’s law enforcement executives are selected to attend this program, which is free of charge. The FBI sponsors four sessions of the National Academy every year. Each session is comprised of a 10-week program in which attendees take classes in leadership programs such as police management, advanced communications, criminal law, behavioral science, and forensic science. The program also includes a rigorous physical training component.

Community Outreach: “The relationships we have within our local community are critical to our success as an agency,” said Sheriff Berry. “Our mission to protect and serve would not be 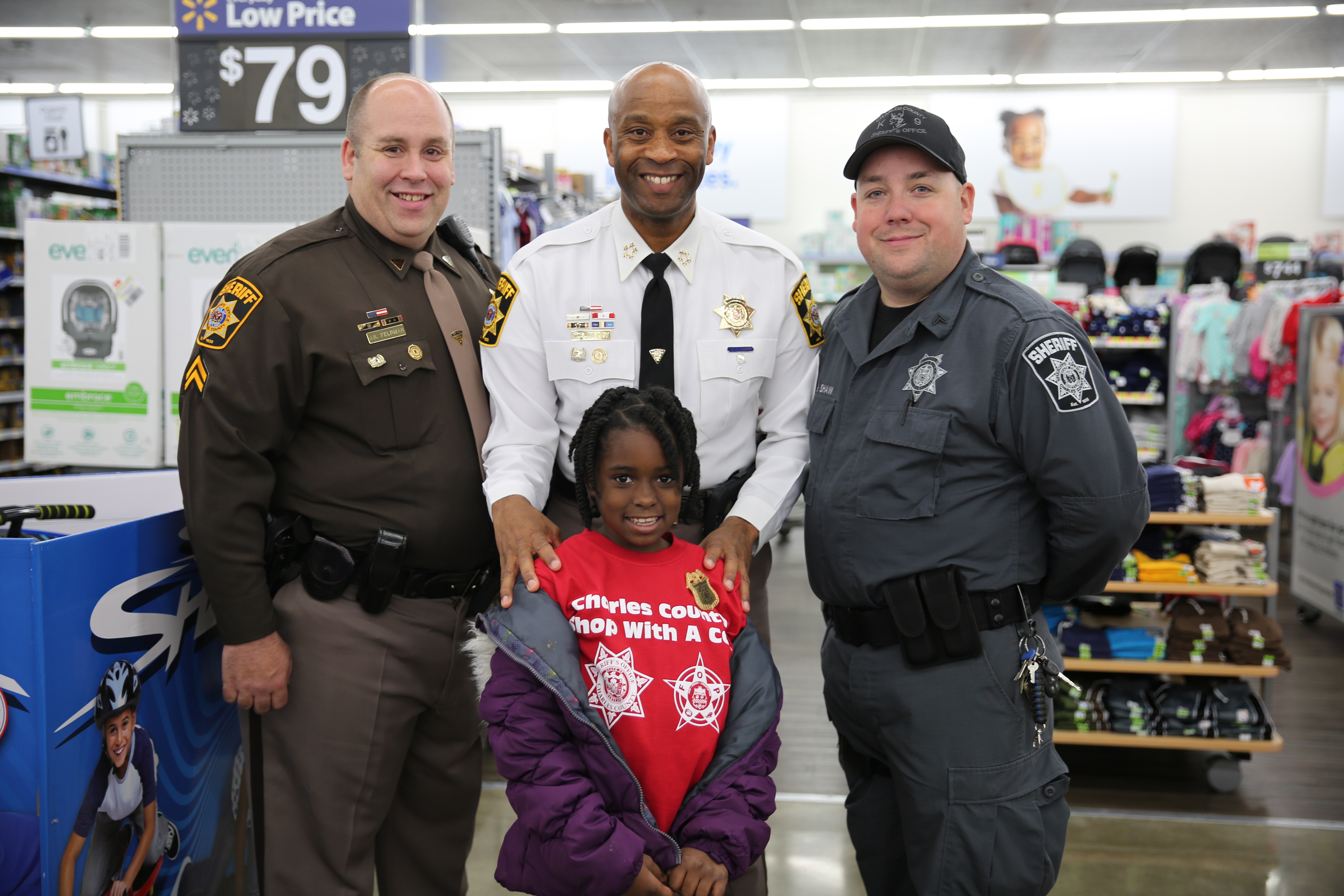 possible without the people and organizations who support us through various means.” The CCSO continues to join forces with organizations such as the Center for Abused Persons (CAP), Charles County Crime Solvers, Parents Affected by Addiction (PABA), and Lifestyles of Maryland. Citizens showed their support by participating in events such as the Crime Watch Kickoff, Citizens Advisory Council Meetings, and National Night Out.

The CCSO, along with the Charles County Correctional Officers Association (CCCOA) and the Charles County Black Officers Association (CCBOA), also continued its support for organizations such as the Children’s Aid Society through their annual Christmas Connection Program, the United Way of Charles County with employee donations and participation in the annual “Day of Caring,” and Special Olympics Maryland through fundraising at the Torch Run in June and Cops on Rooftops in September. The Corrections Division spearheaded many of its own outreach projects, to include the annual Toy Drive in support of Christmas Connection, a Reentry Fair for inmates preparing for release, and a Christmas in April project. On December 1, the Charles County Fraternal Order of Police, Lodge 24 hosted its 11th annual Shop with a Cop event with help from members of the La Plata Police Department, Maryland State Police, and Maryland Transportation Authority Police (Harry Nice Bridge), taking 70 Charles County children to Walmart where each child was able to purchase gifts for themselves and their families.

Engaging with our Youth: For the third straight year, Sheriff Berry paid a special visit to each and every elementary and middle school in Charles County in order to conduct “wellness visits.” 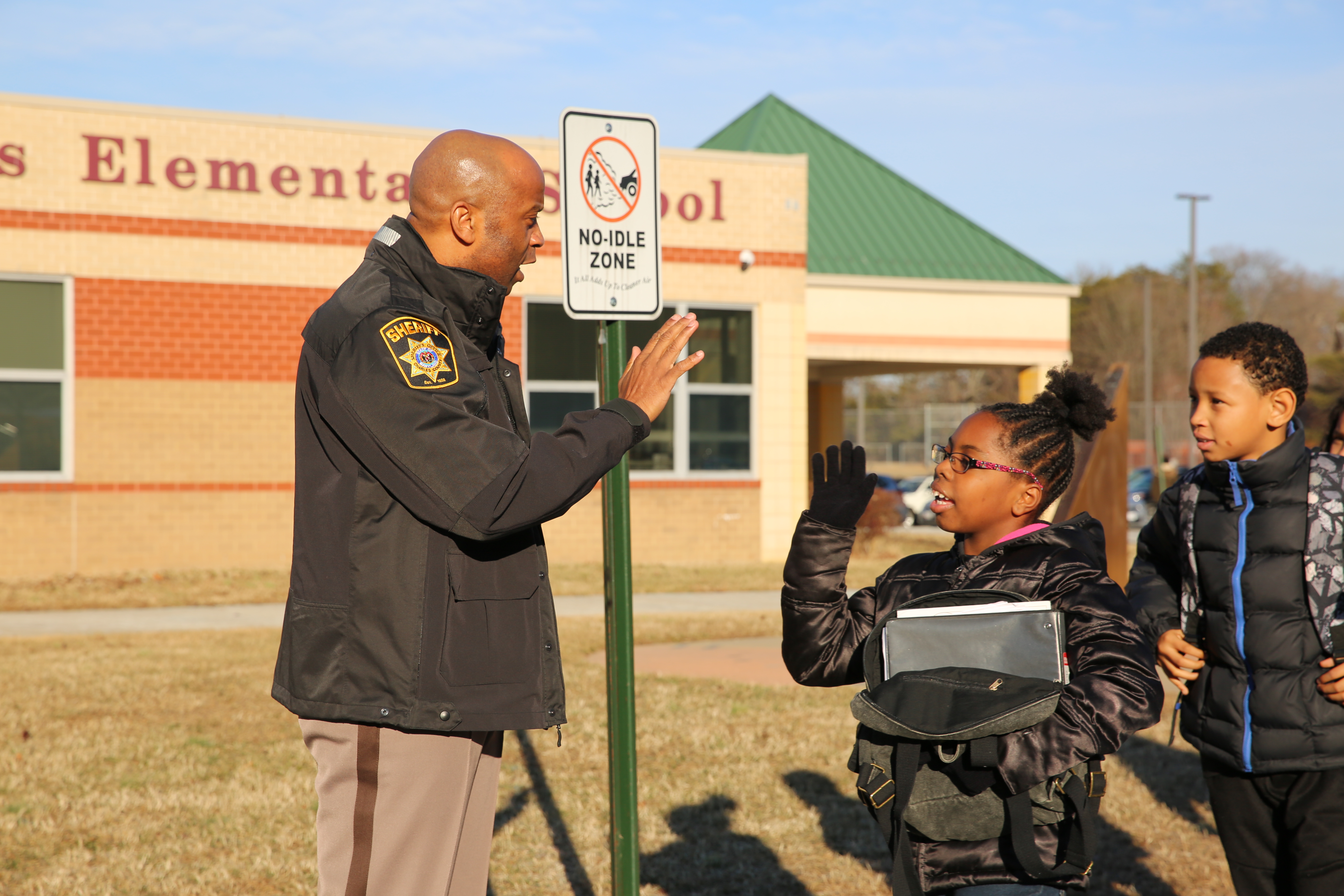 “This is one small way I can show my support for our School Resource Officers, as well as for the students and staff at our schools,” he said. “Charles County has the best and brightest students, and it really makes my day to talk to them.”

Other Sections also took part in strengthening relationships with our youth. In light of a tragic school shooting which took place 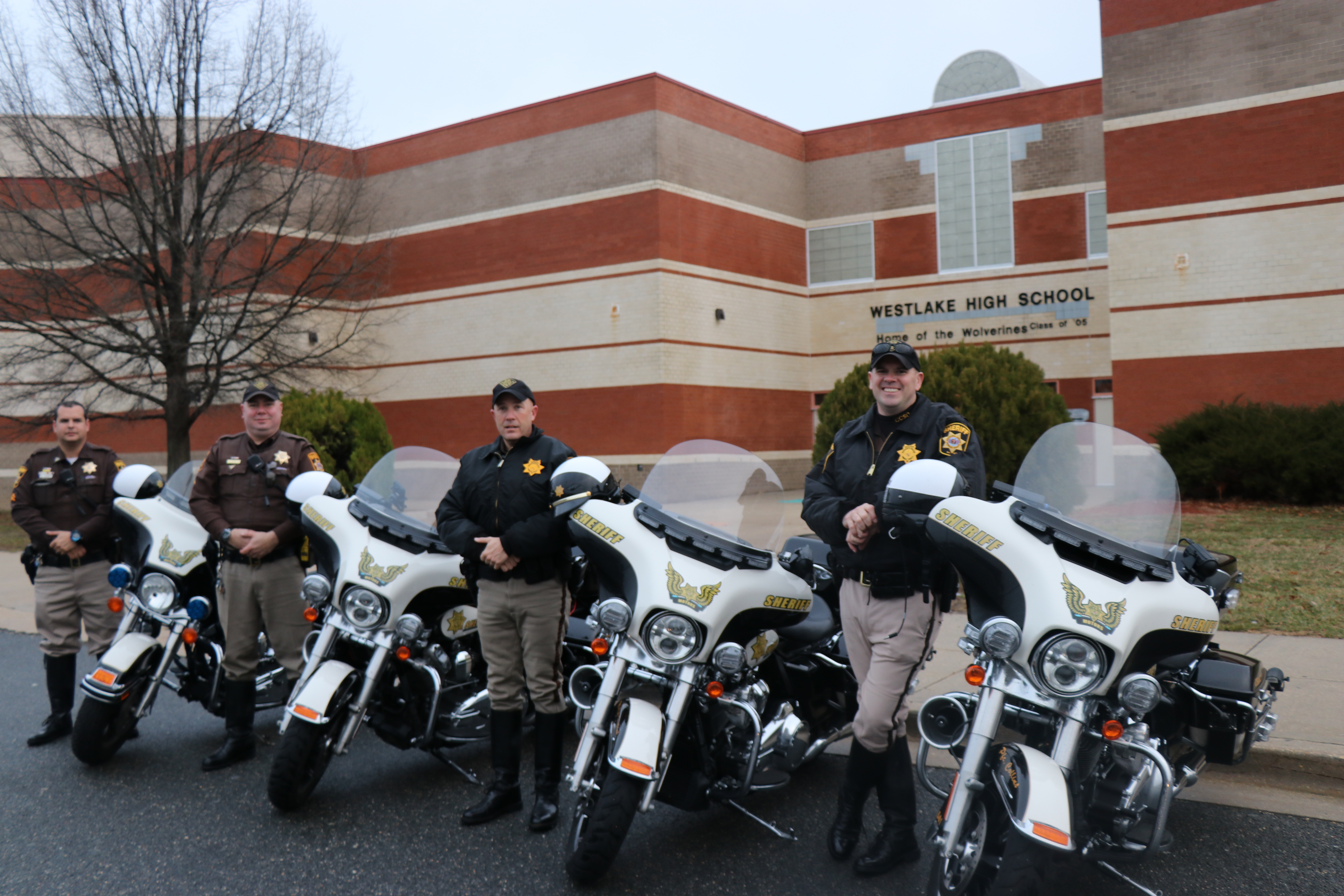 in Florida in February, members of the Traffic Operations Unit stopped by several schools to let the kids know they were there for them. Many officers participated in Career Days or other special events at the schools.

Our School Resource Unit continued its tradition of hosting several camps for the elementary and middle school students throughout the year. In June, after school let out, they kicked off the summer with the Ladies Leadership soccer camp, held at Laurel Springs Regional Park. The Badges for Baseball camp took place in late June and was held also at Laurel Springs, followed by Cops for Kids at St. Charles High School in early July. They also hosted the Summer Youth Achievement Program for four weeks during the summer at St. Charles High School, and the Just Say No Camp in August at the College of Southern Maryland.

“We are grateful to have had a successful 2018. The CCSO has certainly come a long way in our 360 years, and we will continue our tradition of excellence in 2019,” said Sheriff Berry. “We have a lot to be thankful for, and a lot to look forward to.”