CCSO OFFICERS APPREHEND ARMED ROBBERY SUSPECT /  INVESTIGATORS TRYING TO IDENTIFY SUSPECTS IN SIMILAR ROBBERY: Charles County Sheriff’s detectives are investigating three armed robberies that occurred at drug stores over the past few days. It appears one suspect committed two of the robberies, and two different suspects committed a similar robbery. Officers apprehended one suspect after the most recent robbery, and detectives are trying to establish whether or not all of the cases and suspects are connected. Charles County Crime Solvers is offering a cash reward. 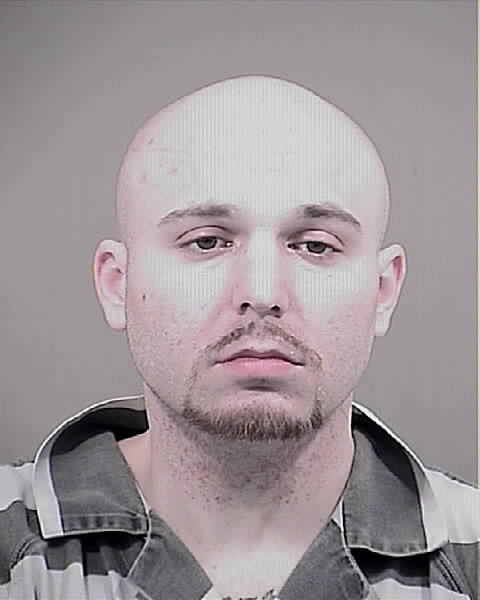 On Feb. 8 at 9:09 p.m., officers responded to the CVS located in the 4200 block of Altamont Place in White Plains after receiving a 911 call about a robbery in progress. According to employees, a white male entered the store, approached the pharmacist, displayed a handgun and demanded Xanax – pills used to treat depression. Fearing for his safety, the pharmacist complied and the suspect fled. Patrol officers, detectives and a police K9 responded to the scene and began a canvass. During their search, Det. J. Riffle observed the suspect emerge from a wooded area near the CVS and get into a van that was parked nearby. Det. Riffle stopped the van and observed the suspect in the back. The suspect was positively identified as the person involved in the robbery and was arrested. Investigators determined the suspect, Robert Allan Krell, 32, of La Plata, fled after the robbery and went to a nearby store where he called a taxi. He then took a taxi back to the CVS where his intent was to pick up a backpack he left after the robbery. Detectives believe Krell may have been involved in a similar robbery that occurred on Feb. 7 at the CVS in La Plata. In that case, a lone white male brandished a handgun at a pharmacist and stole prescription Oxycodone pills. That investigation is continuing. Krell was charged with armed robbery, first-degree assault, second-degree assault and use of a handgun during a violent crime in the Altamont case. Anyone with additional information about these cases is asked to call Det. Det. C. Gregory at (301) 609-6507.

In another robbery that occurred on Feb. 8, two black males armed with a metal pole entered a CVS in the 3000 block of Technology Place in Waldorf and approached the pharmacy area. They jumped over the counter and stole several bottles of Promethazine – a drug often used as histamine or for pain control. A security camera captured images of the suspects as they committed the robbery. Anyone with information about their identities is asked to call Det. Hemsley at (301) 609-6470. Tipsters wishing to remain anonymous may contact Charles County Crime Solvers by  calling 1-866-411-TIPS, texting CHARLES + the tip to CRIMES (274637) or submitting tips online at tipsubmit.com. A cash reward of up to $1,000 is being offered by Charles County Crime Solvers. 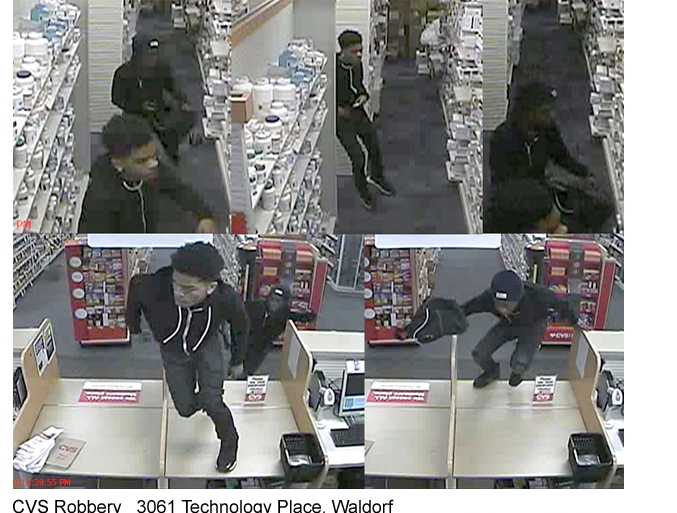