THEFT FROM CONSTRUCTION SITE: Sometime between 12 p.m. on Sept. 25 and 6:30 a.m. on September 28, a trailer and bobcat loader were stolen from a construction site located at the intersection of St. Christopher Dr. and Continental Dr. in La Plata. Officer B. Rash is investigating.

BURGLARY: On Sept. 27 at 1 p.m., damage was discovered to a building on Rich Hill Farm Place in Bel Alton. It appears unknown suspect(s) cut the fence to gain entry to the property, and then shattered several windows and forced a door open. No property was stolen. Cpl. J. Walter is investigating.

MAN CHARGED WITH IMPERSONATING A POLICE OFFICER: On Sept. 24, officers conducted a search warrant in the 7600 block of Kent Drive in Charlotte Hall after receiving information about a person who was possibly impersonating a police officer. During the search, officers found illegal prescription pills, drug paraphernalia, police equipment, and a replica gun. Steven Richard Davis, Jr., 27, of Charlotte Hall, was arrested and charged with possession of a controlled dangerous substance and impersonating a police officer. At this time, there is no evidence Davis had contact with any strangers while impersonating an officer; however, officers would like to hear from anyone who has additional information. Tipsters may contact PFC. E. Weaver at (301) 932-2222.

BANK ROBBERY/CRIME SOLVERS OFFERING CASH REWARD: On Sept. 24 at 11:57 a.m., officers responded to the SunTrust Bank located at 3070 Leonardtown Road in Waldorf for the report of a robbery. Upon arrival, officers learned that a man walked into the bank, approached a teller and handed her a note implying a robbery and demanding money. The teller complied and the suspect fled, possibly in an SUV. The suspect is described as a black male in his 40’s, between 5’8” and 5’10”, with a mustache and a bald head. At the time of the robbery, the suspect was wearing a long-sleeved white shirt and blue jeans. Anyone with information is asked to call Det. Hemsley at (301) 609-6470. Tipsters wishing to remain anonymous may contact Charles County Crime Solvers by calling 1-866-411-TIPS, texting CHARLES + the tip to CRIMES (274637) or submitting tips online at tipsubmit.com.  A $1,000 cash reward is being offered for information leading to the arrest of the suspect. 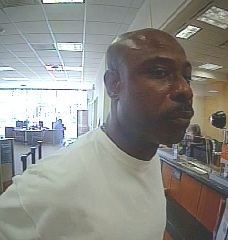