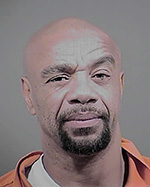 UPDATE IN FIRST-DEGREE ASSAULT/DEPARTMENTAL SHOOTING: Charles County Sheriff’s detectives have obtained an arrest warrant charging Lavon DeWayne Chisley, 49, of Bryans Road with two counts of first-degree assault, two counts of second-degree assault, malicious destruction of property and carrying a deadly weapon with intent to injure in connection with a domestic-related assault that occurred on July 22 in the 3000 block of Charleton Court in Waldorf. Chisley is charged with assaulting a 58-year-old woman with whom he had a relationship. Officers responded to the house after a resident called 911 three times and relayed information of a fight in progress. Two officers arrived at the house simultaneously and observed Chisley and the woman in the front yard. Chisley was holding a knife in his hand and appeared agitated. Officers gave verbal commands to Chisley to drop the knife but he refused. Instead, Chisley continued walking in a forward motion toward one of the officers. The officer, fearing for his life, discharged his firearm one time striking Chisley in the abdomen. Afterwards, the officer approached, pushed the knife out of reach and secured Chisley until additional officers arrived and provided first aid. Chisley was transported to a hospital and is in stable condition. The officer involved in the shooting, PFC Jose Marti, has more than 25 years of law enforcement experience and is a nine year veteran of the CCSO. He was placed on administrative leave in accordance with agency policy. Anyone with additional information is asked to call Sgt. J. Shoemaker at (301) 609-6451. The investigation is continuing.