Criminal Justice students at North Point High School have a tradition of excellence in performing at the SkillsUSA Championships, and this year has been no exception. With ten students placing at Regionals, fourteen placing at States and five competing at Nationals, it is safe to say that the program is as strong as ever.

During the Criminal Justice portion, students were challenged on an individual basis and were scored on how well they handled calls for loud music, a traffic stop and dealing with a domestic dispute. Junior Matt Bowie placed third, qualifying him for the State competition. Others who competed in this portion of the competition were Devin Heilmeier, Olivia Holmes-Chesley, Sydney Moore and James Payne.

The Crime Scene Investigation portion of the competition consisted of three, three-man teams who were scored on their ability to process a crime scene. All three teams from North Point High School placed in this portion, qualifying them to move on to the State competition. First place winners were Stephanie McCarter, Dylan McCabe and Patricia Atkinson; second place was won by Shawna McCarter, Jabria Miles and Shanda Braxton; and in third place were Miriam Requeno, Brittany Jenkins and William Sieger.

On June 22-27, students travelled to Louisville, KY, with Officer Matt VanHorn to compete in the National SkillsUSA 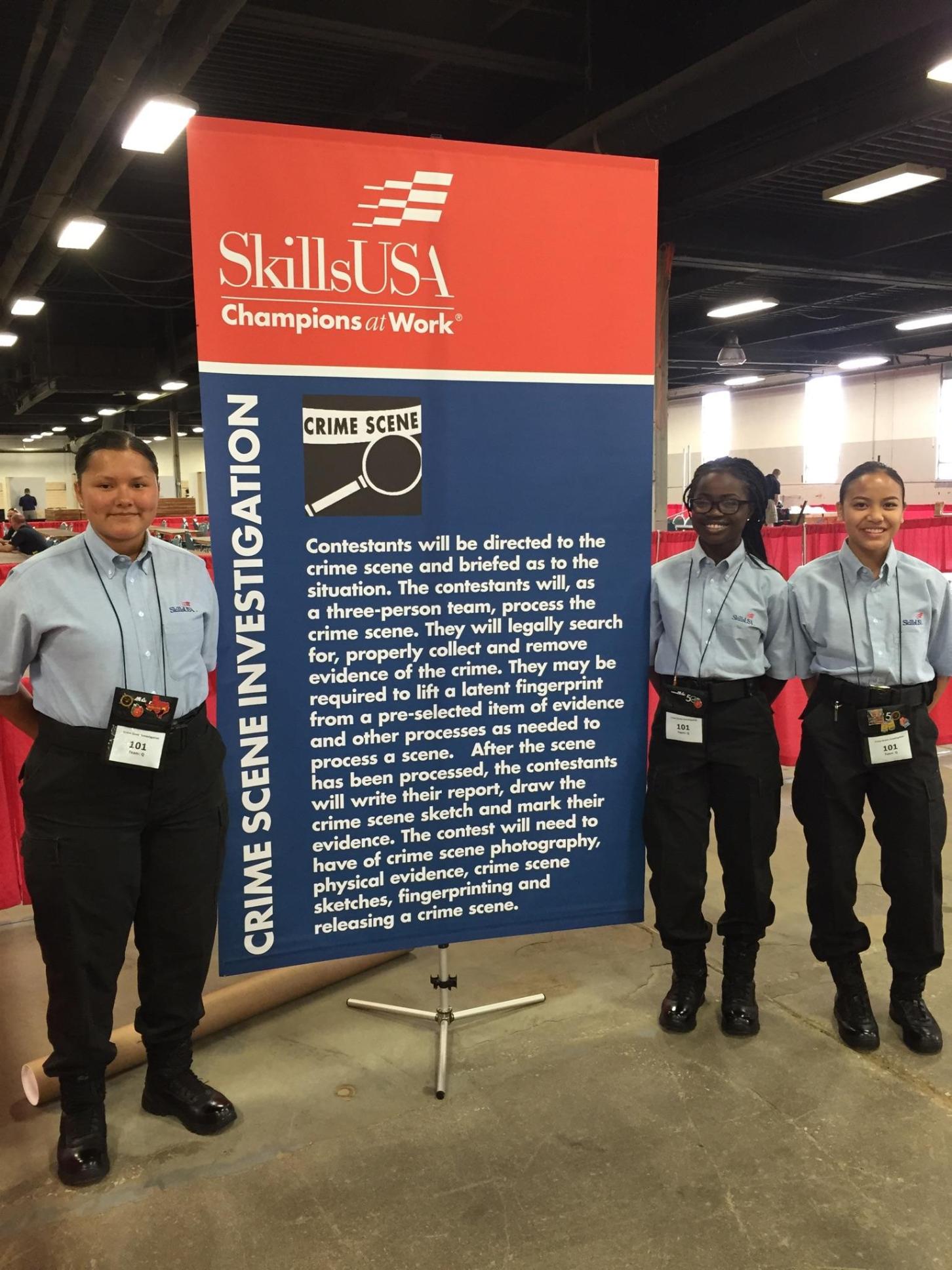 “Attending the National competition was an awesome experience,” said Officer VanHorn. “The students from North Point High School competed with and stood out amongst the top students in the country. They represented their school and Charles County very well and should be very proud of themselves.”

To the students who participate, these competitions mean so much more than just bringing home medals. “Participating in the Criminal Justice Program and competing at SkillsUSA opens up a lot of doors for us,” says senior Olivia Holmes-Chesley. “It sets the tone for what we want to do after high school.”

Officer Travis Yates volunteered his time throughout the school year to train the students. “It is truly rewarding to have the opportunity to work with such a talented group of kids,” said Yates. “Not only do I get to share my criminal justice knowledge and skills with them, but their passion and dedication remind us of why we chose this career path.”

“I was very proud of all the students who competed,” said Corporal Rhett Calloway of the Charles County Sheriff’s Office, who heads the Criminal Justice Program at North Point High School. “They put themselves out there to be judged and that is stressful in itself. Each one of them trained extremely hard, gave up a lot of their own time to be prepared and did the best that they could. Congratulations to them all.”

“The students in our Criminal Justice Program are some of the best and brightest in Charles County,” said Sheriff Troy Berry. “They are top-notch students who serve as excellent role models for their younger peers. Their hard work and dedication, as well as that of their instructors, makes the Charles County Sheriff’s Office very proud.”