DETECTIVES INVESTIGATING STABBING: On May 19 at 1:50 a.m., officers responded to Charles Regional Medical Center for the report of a stabbing victim. A preliminary investigation showed the victim, 28, was transported to the hospital by an acquaintance; he had a stab wound to his back and was in serious condition. The victim was transferred to another hospital for treatment. It is not clear where the actual stabbing occurred. Anyone with information is asked to call Det. J. Elliott at (301) 609- 6515.

BURGLARY: On May 18 between 12 p.m. to 7 p.m., unknown suspect(s) broke into a house in the 4700 block of Leonardtown Road in Waldorf by entering an unlocked door. A flat screen TV and money were stolen.  Officer S. Hooper is investigating.

DETECTIVES SEEK PUBLIC’S HELP IDENTIFYING ROBBERY SUSPECT/CRIME SOLVERS OFFERING REWARD:  On May 17 at 9:41 p.m., a male suspect entered a deli quick shop in the 3000 block of St. Charles Parkway. He approached a clerk (who was near the back of the shop) displayed a knife and demanded money.  The suspect forced the clerk to the front counter where he grabbed money from the register and a pack of Newport cigarettes. The clerk sustained several cuts to the wrist during the robbery. Photos of the suspect were caught on a surveillance camera. He is about 6’3” to 6’5” in height and has an athletic build. It appeared he had scars or skin discoloration on his right arm. Anyone with information is asked to contact Detective Gregory at 301-609-6507. Tipsters wishing to remain anonymous may contact Crime Solvers by calling 1-866-411-TIPS, texting CHARLES + the tip to CRIMES (274637) or submitting tips online at tipsubmit.com.  Crime Solvers is offering a cash reward of up to $1,000 for information leading to the arrest of the suspect. 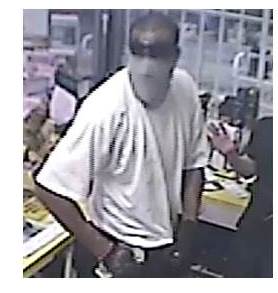 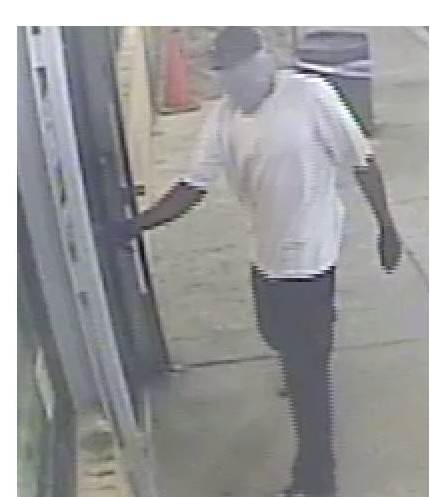 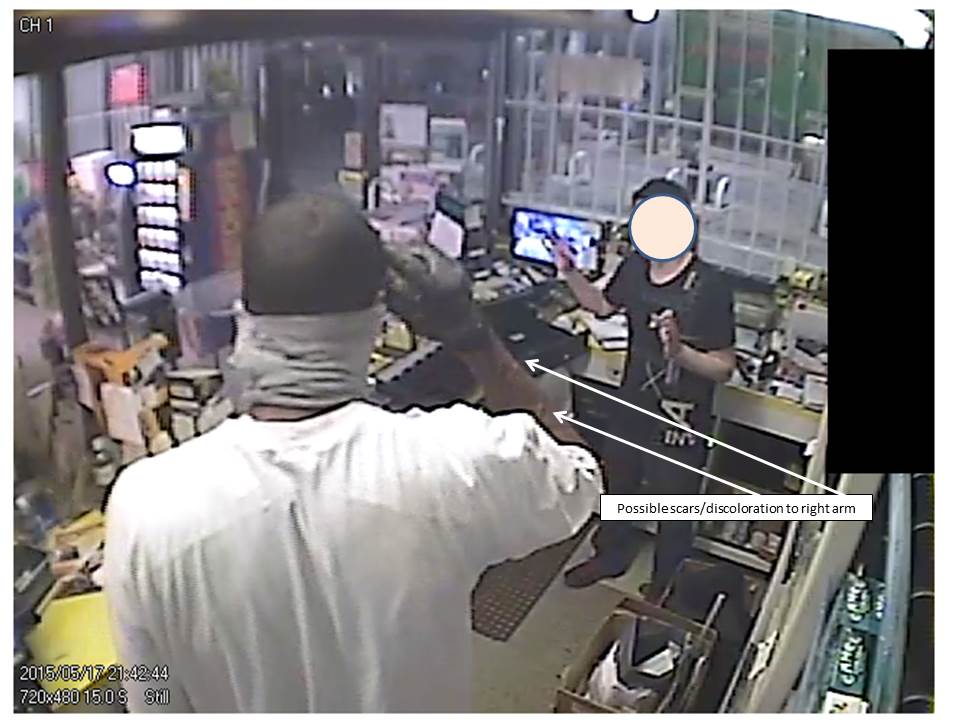 FUGITIVE LOCATED: On May 18 at 4 p.m. officers were conducting seatbelt enforcement on Crain Highway near Pierce Road when they observed a man not wearing a seatbelt. They also recognized the man as someone who had several open warrants for theft, burglary and drug charges. Officers attempted to initiate a traffic stop, but the driver fled a short distance. The car stopped and the driver, Ernest Hubert Johnson, 27, of Waldorf was arrested. He was transported to the Charles County Detention Center. Cpl. T. Yates made the arrest.

OFFICER ASSAULTED: On May 16 at 11 p.m., an officer was inside a fast food restaurant in the 3300 block of Leonardtown Road in Waldorf when he observed a woman enter the business. She was disheveled and appeared to be under the influence of drugs or alcohol. The officer attempted to talk with the woman to see if she needed help, but she suddenly began cursing and went into a bathroom. She continued cursing and refused to leave. The officer attempted to check on her, but she struck him on the arm with a belt. She tried to assault the officer again but he was able to take her into custody after a brief struggle. Megan Lee Maxwell, 38, of Mechanicsville was charged with disorderly conduct and assault. PFC R. Bagley investigated.

BURGLARY: On May 16 between 9 a.m. to 10 a.m., unknown suspect(s) forced open a basement window of a house in the 2200 block of Bridle Path Drive in Waldorf and stole a firearm and money. Officers canvassed the area and located a witness who reported seeing a white passenger car in the area just prior to the burglary. PFC R. Johnson is investigating.

BURGLARY: On May 17 between 11:30 a.m. to 1:30 p.m., unknown suspect(s) broke into a house in the 10800 block of Trinity Church Road in Charlotte Hall and stole jewelry. A witness reported seeing a red vehicle in the area prior to the burglary. It is not clear if the occupants of that car were involved in the theft.  Cpl. T. Lee is investigating.

MAN CHARGED WITH POSSESSION OF HANDGUN: On May 13 at 11:30 a.m., Cpl.  M. Sokoloff initiated a traffic stop on Gittings Court in Waldorf after observing a car being operated by a person with a revoked driver’s license. Further investigation showed the driver had a gun hidden in his waistband. Malcolm Xavier Bragg, 20, of Newburg, was charged with traffic violations and illegal possession of a firearm.

DETECTIVES LINK JUVENILES TO THEFT OF MOTOR VEHICLES: Detectives assigned to the Criminal Investigations Division recently charged four juveniles, ranging from 14 to 17-years-old, in connection with the theft of a motorcycle and an ATV which were reported stolen from Welcome in February. Det. D. Savoy investigated.