Charles County Sheriff Rex W. Coffey said outstanding police work led to the apprehension of three armed suspects who had just shot a man they had specifically targeted for money.

On May 7 at 6:20 a.m., two masked men approached a 31-year-old male who was walking out of his apartment building with his family in the 4100 block of Falcon Place in Waldorf. The men showed a gun and forced the victim and his family back inside where they held them at gunpoint and demanded money. At about 8 a.m., a scuffle ensued and the victim was shot multiple times in the arm and leg. The suspects stole numerous items and fled.

A call was made to 911 and a description of the suspects and their vehicle was broadcast. Officers canvassed the area and K9 officer PFC D. Behm spotted the suspects’ truck –a Chevy Tahoe- on route 228. He attempted to stop it, but the driver fled. Officers pursued the suspects to Route 210 where the driver lost control near Farmington Drive and hit a guardrail. The driver and a passenger jumped out of the SUV and fled in different directions. Another suspect stayed in the vehicle and was apprehended.

The other suspect ran to a wooded area. Cpl. C. Clevenger and his K9 partner, Eno, along with K9 Officer W. Christian (without his dog) and patrol officer PFC P. Alvarez, tracked the suspect for nearly a half mile – through a wooded terrain, a creek, and through two neighborhoods – and eventually found the suspect hiding in a children’s play set in the backyard of a house. The suspect was apprehended without further incident. Forensics personnel responded to the scene and recovered additional evidence. Officers also observed another gun inside the suspects’ vehicle.

Detectives assigned to the Criminal Investigations Division say it appears the suspects knew of the victim and targeted him because they believed he had money. The suspects, ages 30, 19 and 15, all from Washington, D.C., will be charged with attempted murder, first-degree assault, second-degree assault, kidnapping, burglary, theft and other charges. The victim was flown to a hospital where he was admitted with injuries that do not appear to be life-threatening. The investigation is continuing. 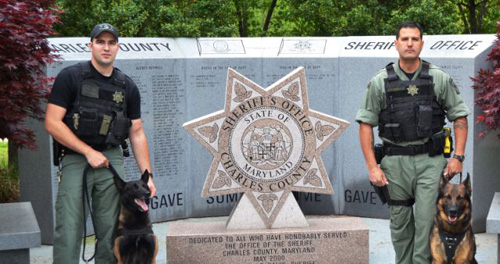 Pictured from left to right are Officer Behm with K9 Ryker and Officer Clevenger with K9 Eno.