Corporal Welch, a 15-year veteran of the CCSO, was nominated by the sheriff’s office for his work in youth programs. Over the past seven years, Cpl. Welch has been assigned to the school resource unit where he has been instrumental in organizing and implementing several youth sports camps designed to build strong relationships between juveniles and police officers. Because of their success, the camps have continued yearly. “Playing sports builds teamwork and more importantly, builds relationships,” said Welch who has consistently been at the helm of three highly successful camps:

“Cpl. Welch dedicated his time and many off-duty hours to ensure the success of all of these programs and it is people like him that make our outreach efforts a success,” Sheriff Coffey said. 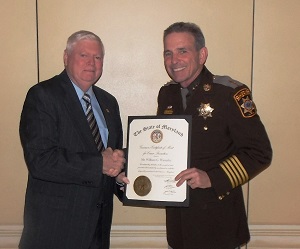 Pictured from left to right are Mr. William Wamsley and Sheriff Rex Coffey.

Waldorf resident, Bill Wamsley, was honored in the category for citizen’s who made a difference in crime prevention. When the leader of the Pinefield Citizens on Patrol had to suddenly retire due to a medical emergency, Wamsley stepped into the leadership role and ensured the program would continue. Since then, Wamsley has continued to increase the number of people patrolling the neighborhood, created a crime watch data base for his community, and he established a communications system with Cpl. Richards, the community policing officer assigned to the area. In addition, the group arranged a neighborhood parade and a community yard sale. “Neighbors are getting to know each other which is critical to the success of a safe community,” said Sheriff Coffey. Upon receiving the award, Wamsley said, “We are concerned citizens who help our neighbors and we want to live in a safe community. The most critical issue for all of us is to remain safe and to report suspicious activity.”

“These awards prove that sometimes all it takes is for one person to take that first step to organize programs. Whether it starts with the sheriff’s office or with a citizen, Charles County is a community who is connected by innovative programs and outstanding outreach efforts,” Sheriff Coffey said. “I am honored to have received these awards and to serve for an agency and for a county who truly cares about keeping our communities safe.”