BOMB THREAT AT COURTHOUSE: On Feb. 20 at about 8:50 a.m., officers responded to the Charles County courthouse in La Plata after someone called Prince George’s County 911 and indicated a bomb was outside the Circuit Court section of the building. Charles County sheriff’s office K-9 teams, including bomb detection dogs, responded along with patrol officers. They conducted an extensive canvass and did not locate anything. The courthouse was not evacuated while officers performed their search. Investigators from the Criminal Investigations Division are investigating.

ACCIDENTAL SHOOTING: On Feb. 19 at 4:50 p.m., officers responded to the 5100 block of Stonecat Court in Waldorf after a man called 911 and reported he had been shot by an unknown male while stopped in traffic near his neighborhood. When officers arrived, they observed the man had a gunshot wound to his leg; they also noted inconsistencies with his story. The man was transported to a hospital where detectives responded. Investigators soon learned the man accidently shot himself while attempting to unload his black powder gun at home. Det. J. Austin of the Criminal Investigations Division is investigating. 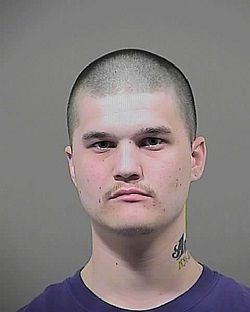 OFFICERS APPREHEND ASSAULT SUSPECT: On Feb. 16 at 11:45 a.m., officers responded to the area of Forest Park at Renner Road in Waldorf for the report of an assault in progress. The victims reported they were driving on Forest Park Road when a man intentionally tried to run them off the road. A lookout was broadcast and Officer S. Hooper observed the suspect’s truck and initiated a traffic stop. Other officers spoke with the people in the car and discovered the suspect was the ex-boyfriend of one of the occupants and he tried to force her car off the roadway because he was angry with her. The suspect, Joseph Robert Willet, III, 20, of Hughesville, was arrested. Officers found a shotgun in his truck as well as knives and ammunition. He was charged with reckless endangerment and assault.