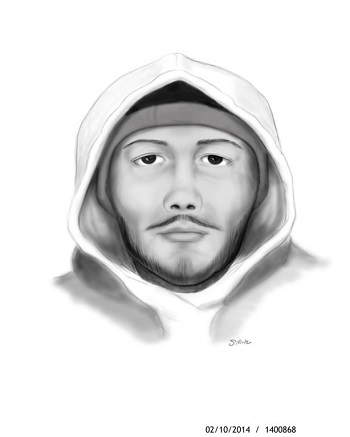 This sketch depicts the male suspect involved in a robbery on Jan. 30, 2014.

FORENSIC ARTIST CREATES SKETCH OF ROBBERY SUSPECT/CRIME SOLVERS OFFERING REWARD: Charles County Sheriff’s detectives are seeking the identity of a robbery suspect and Charles County Crime Solvers is offering a cash reward for information leading to an arrest. On Jan. 30 at 12:46 p.m., the victim, an employee of a local business, was walking toward a bank in the 3200 block of Crain Highway in Waldorf when the suspect approached, assaulted him and grabbed a bank deposit bag he was carrying. The suspect fled and the victim called police. Detectives obtained a photo taken from a surveillance camera near the bank. In addition, Sgt. D. Stahl, a forensic artist, created a sketch of the suspect based on the victim’s description. The suspect is a black male with a light complexion and at the time of the robbery had a thin moustache. He weighs about 150 lbs., and was wearing a black jacket, gray hooded sweatshirt, dark pants, and teal or turquoise colored shoes. Anyone with information about this case is asked to call Det. J. Austin at (301) 609-6504. Tipsters wishing to remain anonymous may contact Crime Solvers at 1-866-411-TIPS or Text CHARLES + your tip to CRIMES or visit www.ccso.us to submit a web tip. A cash reward of up to $1,000 is being offered in this case. 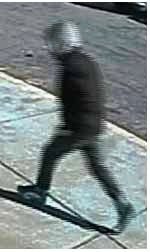 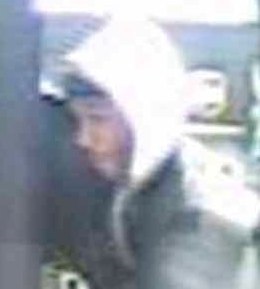 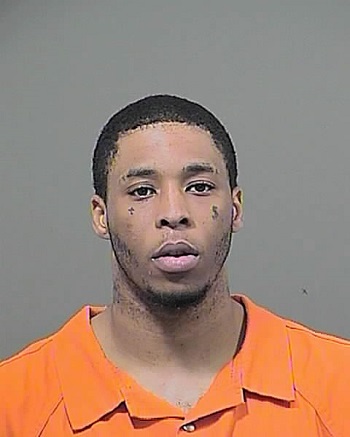 OFFICERS LOCATE FUGITIVE: On Feb. 15 at 4 p.m., officers were in the 6800 block of Ralph Myers Place in Bryans Road searching for Kent Leroy Smith, Jr., 22, of Bryans Road who had open warrants for felony assault, carrying a dangerous weapon, trespassing, violation of probation regarding a drug case, felony theft, rogue and vagabond and traffic offenses. Officers spotted Smith near Surrey Place but he fled once he was observed. Officers pursued Smith on foot into a wooded area where Smith fell into a creek. He was apprehended without further incident. Officers found Smith in possession of a glass vile of suspected PCP, five clear glassine bags with suspected crack cocaine and a plastic bag with three suspected crack cocaine rocks. Smith was transported to the Charles County Detention Center and charged with possession of a controlled dangerous substance. He was also served the outstanding warrants. PFC B. Moore and PFC D. Graham made the arrest.

ROBBERY: On Feb. 17 at 12:17 a.m., a man entered a convenience store in the 2400 block of Crain Highway in Waldorf and approached a clerk to allegedly make a purchase. Instead, the suspect removed a handgun from his coat pocket, displayed it to the cashier and demanded money. The clerk complied and the suspect fled. The suspect is described as a black male with a light complexion, approximately 5’6”- 5’8”, slender build, wearing a black hooded jacket (which partially covered his face), black pants and wearing blue/ white sports gloves. Responding officers arrived in the area, set a perimeter and K-9 team conducted a track which stopped a short distance away. The Criminal Investigations Division is investigating.