Accredited agencies under CALEA are required to undergo audits every three years. Before the 2013 assessment got underway, Sheriff Coffey instructed his Planning and Accreditation team to apply for the Gold Standard – the most comprehensive review with the strictest guidelines.

CALEA already has strict guidelines with which agencies must comply to be accredited. However, CALEA does allow agencies to determine the type of audit they are seeking. For instance, agencies just starting out in the accreditation process might choose a standard file review assessment and those who have been in the program for a minimum of two assessments and who meet certain other requirements can request a Gold Standard Assessment.

Douglas Goodman, Chief of Police for the Ashland Police Department in Virginia, and Lieutenant Daniel Isgett of the Charleston County Sheriff’s Office in South Carolina were the assessors assigned to conduct the audit. They began their work in August 2013. After an intensive on-site review – which included file reviews, static displays, ride-alongs, and interviews with employees, county residents and community leaders – the assessment team concluded the CCSO had achieved a perfect assessment.

According to a report prepared by the assessors, the team found the Charles County Sheriff’s Office to be well prepared, hospitable and exhibiting the highest levels of professionalism one would expect of a CALEA accredited agency. “It was clear the CALEA standards have become woven into the fabric of the Agency’s culture…and much credit must be given to the Accreditation Manager, Danny Johnson and his staff: Carol Davis, Reagan Henehan and Karlee Adams. Sheriff Coffey and his staff have set the highest of professional standards and performance expectations, and his agency rises to the challenge every time,” wrote Chief Goodman.

“During the static display and facility tour, the assessors were exceedingly impressed with all of our facilities, processes, operations and personnel,” said Johnson. “Each person they talked with was professional and extremely knowledgeable about Agency operations. Later, during their stay, the assessors talked with many sworn and civilian personnel and they attended roll calls and went on a ride-along at each district station. They were truly impressed with everyone they met,” Johnson said.

The report also highlighted a review of statistical data which proved the observations and conclusions by the team. “While the agency has seen a staggering increase in workload as demonstrated by a 47 percent increase in the calls for service since 2007, they have seen a reduction in Part I offenses by nearly 25 percent during that time period,” said Chief Goodman.

In addition, the assessment report highlighted two distinct programs unique to the Agency: the Volunteer Auxiliary program that utilizes citizen volunteers to assist the agency with tasks such as fingerprinting, motorist assistance and public assistance at special events and the Cadet program which is a proactive recruiting platform that encourages young adults who are interested in a career in law enforcement to get a jump start on their career. Cadets help the agency by participating in non-sworn functions such as traffic safety and other duties. These auxiliary programs left an imprint on Chief Goodman who told the agency he planned on taking a look at the programs to implement at his own department.

The report ended with a two page summary of the assessment which found above all a clear and defining commitment to the community. “From the Sheriff down to the newest member, the dedication to the people and the businesses of Charles County is the highest priority. Through direct law enforcement service in the field, good stewardship of resources and involvement in community civic ventures, the county should be very proud of its Sheriff’s Office,” the assessors remarked. “To achieve this status is remarkable,” said Sheriff Coffey, “and it’s a testament to the work performed day in and day out by our dedicated employees,” Coffey said.

Further, by being accredited, the agency receives a ten percent discount each year on liability insurance though the Local Government Insurance Trust which equals about $7,100 a year. The Sheriff’s Office was first accredited in 2001 and has maintained its accredited status in audits in 2004, 2007, and in 2010 when it achieved the Flagship status, which is equivalent to the Excellence award. 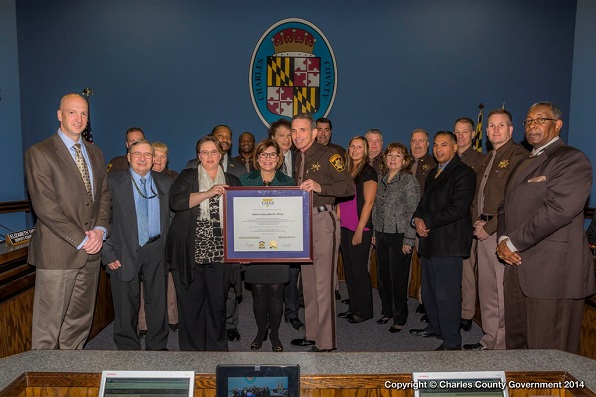 WHAT IS CALEA? The CALEA on-site assessment provides an independent, objective peer review of the agency’s programs and practices, allowing for constructive feedback for further improvements. And, the peer review is an excellent forum for sharing ideas. The assessors, all experienced law enforcement professionals, bring ideas from their own agencies and from other agencies they’ve reviewed. The assessment process requires an agency to undergo an in-depth review of its management, administration, operations, and support services in comparison to professional standards. When the agency identifies a deficiency, it creates or revises policies and procedures to correct the situation before a problem occurs.

WHY IS ACCREDITATION SO IMPORTANT? CALEA standards require the agency to establish a reporting process for monitoring and measuring performance. This ensures continual growth and improvement and a method to confirm an agency is practicing what it has established in the written directives system. “As an agency leader, I look forward to these assessments as a report card. This is essential information as our Agency faces the challenges of the next century,” said Sheriff Coffey.