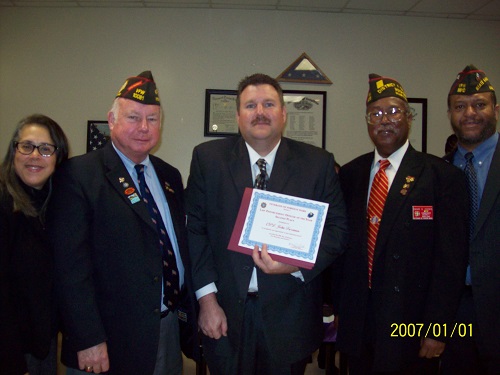 Three Charles County Sheriff’s officers were honored Jan. 5 at the Second Annual Tri-County Veterans of Foreign Wars Officer of the Year Ceremony. Cpl. John Freeman and officers Michael Armstrong and Jena Hatfield were recognized for their brave actions while responding to a call regarding a male suspect armed with a shotgun and threatening to harm his family.

The officers responded to the call in December 2012 and when they first encountered the suspect in a detached garage with his mother and her husband, the suspect racked his shotgun and ordered the officers to leave. While the officers tried to diffuse the situation, Officer Armstrong entered the suspect’s line of fire to move the suspect’s mother to safety. The suspect retreated to a stairwell leading to the second-level of the garage and refused orders to drop his weapon. As the situation worsened and it became apparent that deadly force was imminent, Cpl. Freeman instructed his K9 partner, Brix, to engage the suspect. Brix obeyed his handler’s command, allowing the officers to disarm the suspect and diffuse the situation. The suspect was taken into custody and after being evaluated at a hospital, he was transported to the Charles Count Detention Center, where he was charged for his offenses.

“These three officers bravely subdued a dangerous and unpredictable suspect in a high-pressure environment and their actions saved lives,” said Sheriff Rex Coffey. “They are a credit to their profession and to our community, and I am grateful to the VFW for recognizing them.”

Cpl. Freeman attended the ceremony and accepted the award on the group’s behalf. 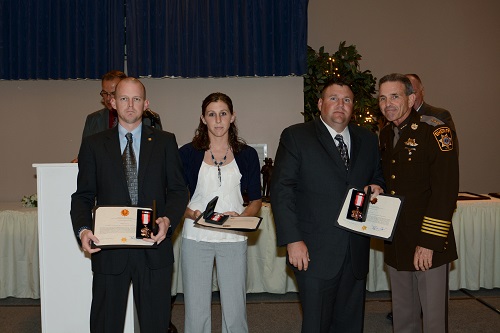 Pictured from left to right at the CCSO 2013 Awards and Retirement Banquet are Officer Michael Armstrong, Officer Jena Hatfield, Cpl. John Freeman and Sheriff Rex Coffey. Sheriff Coffey presented the officers with bronze medals of valor for their actions.