MAIL TAMPERING: On Dec. 24, unknown suspect(s) stole mail from two addresses in the 15000 block of Pointe Meadow Court in Brandywine. The mail was found a short time later near Woodville Road. Someone had opened Christmas cards searching for gift cards or currency. Officer R. Walls is investigating.

SOBRIETY CHECKPOINT: On Dec. 20 between 10 p.m. and 12 a.m., officers assigned to the CCSO Traffic Operations Unit conducted a sobriety checkpoint in the 12800 block of Rock Point Road in Newburg. A total of 315 vehicles passed through the checkpoint: six citations, five warnings and eleven equipment repair orders were issued. One person was arrested for driving while impaired. 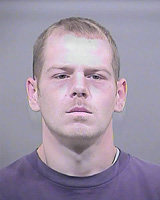 OFFICERS ARREST THEFT SUSPECT AND RECOVER STOLEN PROPERTY: On Dec. 23 at 9:08 p.m., officers responded to Mall Circle in Waldorf for the report of a theft that just occurred. Witnesses said the suspect fled in a truck and provided a description. Officers spotted the suspect leaving the parking lot and attempted to initiate a traffic stop, but the driver refused to pull over. Instead, the driver fled and was eventually stopped on St. Patrick’s Drive. Matthew Allan Prisen, 28, of Waldorf, was arrested without further incident. Officers found numerous tools and a large amount of copper tubing in the bed of Prisen’s truck and determined they had been stolen. Officers were able to track down two victims who positively identified the items as theirs. Prisen was transported to the Charles County Detention Center and charged with rogue and vagabond and theft. Sgt. S. Fetterolf is investigating.