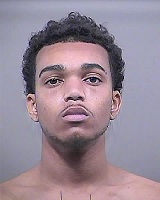 PATROL OFFICERS NAB BURGLARY SUSPECT: On Dec. 12 at 9:52 a.m., Officer J. Jones was conducting a neighborhood patrol check in the 11200 block of Hess Court in Waldorf when he observed a man running from a house while carrying a large blanket which appeared to have items wrapped inside of it. Upon being noticed, the subject ran between two houses across the street and into a wooded area where he dropped the blanket and continued to flee. A suspect look out was broadcast and a perimeter was established within minutes. While looking for the subject, officers received a call for an intrusion alarm at the house where the man was first observed. Additional officers responded to the house and confirmed a burglary had occurred. A Play Station game console, remote controls, games, cords and burglars tools were recovered in the wooded area. The suspect was located and apprehended without incident. Davon Andrew Singh, 18, of Waldorf, was charged with burglary and theft. Officer J. Jones is investigating.

THEFT: Sometime between Dec. 17 and Dec. 18, someone shattered a window of a work van parked on Industrial Drive in Waldorf and stole copper piping. Officer R. Smith is investigating.