Charles County Sheriff’s detectives will be canvassing the 4500 block of Indian Head Highway in Indian Head this evening and passing out fliers seeking the identity of a man who sexually assaulted a woman on Nov. 21 in a wooded area behind a liquor store. Prior to the assault, the suspect was inside a store and his photo was caught on a surveillance camera. The suspect is described as possibly being in his 30’s, 5’8”, 200 lbs., and wore his hair in dreadlocks. Anyone with information about the man’s identity is asked to call Det. Selkirk at (301) 609-6595.

[raw]
[toggle open=”true” title=”UPDATE: SUSPECT IDENTIFIED” color=”#5889b1″]
The suspect in the photograph was identified on November 27. The investigation is ongoing.
[/toggle]
[/raw] 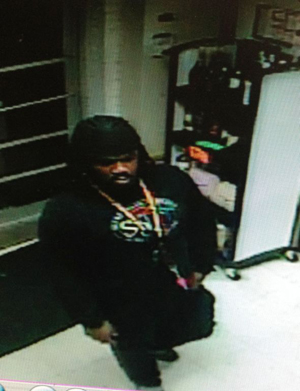