BURGLARY: On Nov. 27 at 2:18 a.m., officers responded to PEP Boys located at 3390 Crain Highway in Waldorf for an intrusion alarm. Sgt. H. Smith arrived on the scene within minutes and saw the front door had been shattered. A police K-9 responded and searched the building but no one was inside. An employee responded and reported several items had been stolen. Officers processed the scene and are pursuing leads. Anyone with information is asked to call PFC S. Chandler at (301) 932-2222. Tipsters wishing to remain anonymous may contact Crime Solvers at 1-866-411-TIPS or Text CHARLES + your tip to CRIMES or visit www.ccso.us to submit a web tip. A cash reward of up to $1,000 is being offered for the tip that leads to the arrest of the suspects. For additional information about Crime Solvers see www.charlescountycrimesolvers.com.

MAN CHARGED WITH PEEPING TOM INCIDENT: On Nov. 26 at 6:07 a.m., officers responded to the 4800 block of Lichfield Place in Waldorf after a witness reported seeing a suspicious male in her neighborhood. PFC M. Sokoloff spotted the man and detained him. The caller indicated the man, Joseph Walter Garrett, Jr., 25, of Waldorf, was the same person she saw on Nov. 21 hiding near an air conditioning unit outside her neighbor’s apartment and peeping into her neighbor’s bedroom and bathroom windows. The witness called police at that time but the man had already fled. Upon further investigation, Garrett was positively identified as the peeping tom from the previous incident and he was arrested. Officers found a plastic bag containing marijuana, burnt marijuana cigarettes, and a smoking device made out of a deer antler inside his car. Also, after the arrest, PFC Sokoloff received a call from the property manager who reported that a female resident made her aware of two sexually explicit notes she found on her car earlier in the month. One of the notes was reportedly written on the back of a court summons issued to Joseph Garrett. Garrett was charged with peeping tom, peeping tom with prurient intent, possession of drugs and possession of drug paraphernalia. A district court commissioner released Garrett from the detention center on a $5,000 bond. The investigation is continuing. 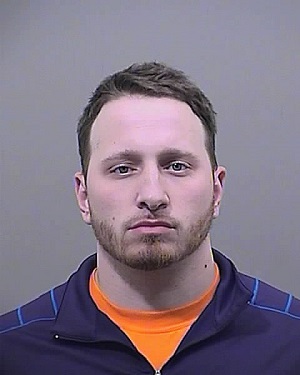 THEFT OF WIRING: Sometime between Nov. 18 and Nov. 26, someone broke into a vacant house in the 8600 block of Kentucky Avenue in La Plata and stole wiring. There were no signs of forced entry into the house. Cpl. P. Hood is investigating.

CRIME SOLVERS OFFERING CASH REWARD FOR INFORMATION IN TWO CITIZEN ROBBERIES: On Nov. 25 at 7 p.m., a 21-year-old male was getting into his car in the 5100 block of Shawe Place in Waldorf when he was approached by a male who tapped on the passenger side window with a handgun. The victim was told to exit the vehicle and empty his pockets. As the victim emptied his pockets, several other suspects approached and went through his vehicle. The suspects fled on foot. The victim was not injured.
In another case, which could be related, officers responded to Keepsake Place at about 7:22 p.m. for the report of a citizen robbery. The victim, 17, said he was approached by a group of males who assaulted him and stole his phone, bag and some clothing. The suspects may have fled in a red SUV and a black car. Anyone with information about either case is asked to call Sgt. T. Miner at (301) 932-2222. Tipsters wishing to remain anonymous may contact Crime Solvers at 1-866-411-TIPS or Text CHARLES + your tip to CRIMES or visit www.ccso.us to submit a web tip. A cash reward of up to $1,000 is being offered for the tip that leads to the arrest of the suspects. For additional information about Crime Solvers see www.charlescountycrimesolvers.com.