The Charles County Sheriff’s Office (CCSO) hosted the 25th Annual “Just Say No” Camp in August at the College of Southern Maryland (CSM).

More than 30 children between the ages of 10 and 13 years old participated in the event, marking one of the program’s largest turnouts. The students, who were selected by their teachers, demonstrated good behavior and consistent attendance at their school-sponsored Just Say No Club meetings.

“Programs like Just Say No reinforce some of the most important lessons young people can learn about making good choices,” said Sheriff Rex Coffey. “I am proud of these students for being part of this program and for being good role models for their peers.”

The Just Say No camp is free. The CCSO’s School Resource Unit officers discuss numerous topics with the students including drug abuse, tobacco and alcohol prevention and internet safety and also introduce students to many aspects of police work. The students met with narcotic detectives and Emergency Services Team members and watched an impressive K9 Unit demonstration. Sheriff Coffey also visited with them and discussed making good choices. The students received lunch and had the opportunity to swim in CSM’s pool each day. They celebrated the conclusion of the camp with a trip to the Chesapeake Beach Water Park.

“This camp is a great reward to those children who are doing the right thing throughout the year and showing their peers that it is okay to refuse to participate in dangerous behaviors whether that be smoking or drinking or sending a nasty message over social networking,” said Cpl. Kaylor, a school resource officer.

The Just Say No Camp is funded through donations from individuals and businesses. Anyone interested in donating may make checks payable to “Charles County Just Say No Club” and mail them to: Charles County Sheriff’s Office, Attn: Cpl. Kaylor, P.O. box 189, La Plata MD 20646.

The CCSO would like to thank the following businesses and organizations who made the 2013 Just Say No Camp a success: Charles County Board of Education, Charles County Citizens for Substance free youth, KNC Marketing, La Plata Kentucky Fried Chicken, La Plata Little Caesars, La Plata Roy Rogers, Nicks of Clinton and Scheff Bus Company. The CCSO also extends special appreciation to the College of Southern Maryland for allowing the camp to be held on its campus. 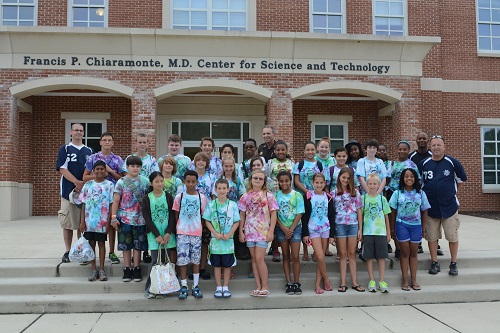 Sheriff Rex Coffey, members of the CCSO School Resource Unit and students in the Just Say No program celebrate the end of the 2013 Just Say No Summer Camp.