Charles County Sheriff’s detectives are seeking the identity of a man wanted in connection with the robbery of a store. On Oct. 15 at 10:50 p.m., a lone male entered the Bryantown Store in the 6400 block of Leonardtown Road in Bryantown. He approached a clerk, showed a handgun and demanded money. The clerk complied and the suspect fled. Images of the suspect were caught on camera and investigators want to know who he is. Charles County Crime Solvers is offering a cash reward for information leading to the suspect’s identity. The suspect is described as a white male, approximately 20-30 years-old, 5’7” – 5’9”, thin build, wearing black faded jeans, a black hooded jacket with the hood over his head, a long white scarf covering his nose, black sun glasses, and gray shoes. He may have a tattoo on his left wrist. 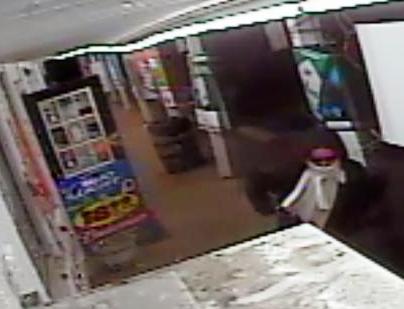 Crime Solvers is offering a reward for information regarding the suspect in these surveillance images. He is wanted for the armed robbery of Bryantown Store on October 15, 2013.