The Charles County Sheriff’s Office is seeking the public’s assistance in identifying a man responsible for a robbery. On Friday, Oct. 4 at 11:51 a.m., a man entered a grocery store in the 3200 block of Crain Highway in Waldorf and approached a teller at a bank branch located inside the store. The man passed a note indicating a robbery and demanded money. The teller complied and the suspect fled. Forensic investigators collected evidence and also obtained a surveillance photo of the man.

The suspect is described as a Hispanic male, 5’8″-5’10”, approximately 300 lbs., with long black hair, and a mustache. At the time of the robbery, he was wearing a red plaid shirt, gray pants, black shoes and a baseball cap with the word “Brewskies” on it. Anyone with information about the suspect’s identity is asked to call Sgt. T. Miner at (301) 932-2222. Callers wishing to remain anonymous may contact Crime Solvers at 1-866-411-TIPS or Text CHARLES + your tip to CRIMES or visit www.ccso.us to submit a web tip. A cash reward of up to $1,000 is being offered. 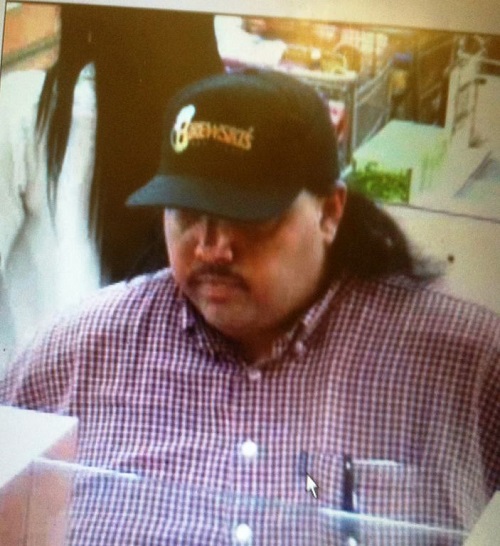 Crime Solvers is offering a reward for information that helps the CCSO identify this man, whose photo was captured by a surveillance camera while he committed a robbery at a PNC Bank.