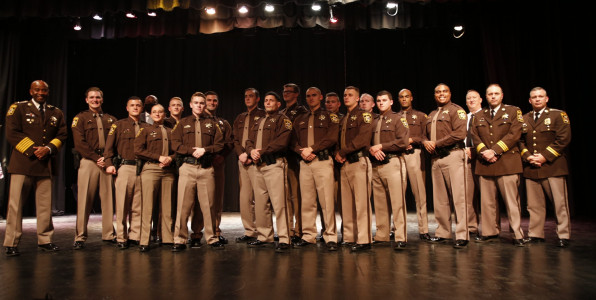 Charles County Sheriff Troy D. Berry is proud to announce sixteen new officers will join the Charles County Sheriff’s Office after their graduation from the Southern Maryland Criminal Justice Academy (SMCJA) Police Entrance Level Training Program. The officers were among a total of 39 candidates – ten with Calvert County and thirteen with St. Mary’s County – who graduated on November 5. “Graduating from the Academy requires dedication, perseverance, tenacity, and many sacrifices. The graduates and their families persevered for 6 months to finish this program, and we are very proud. Of course, none of this would be possible without top-notch instruction. Many thanks to the SMCJA staff and guest instructors for providing excellent training to these recruits,” said Sheriff Berry.

Director of the SMCJA, Captain Bobby Jones of Calvert County, welcomed the graduates and their families and spoke about the training program that started in April 2021 and included over 1,000 hours of instruction.

The Academy’s Board of Directors — Charles County Sheriff Troy D. Berry, St. Mary’s County Sheriff Timothy K. Cameron and Calvert County Sheriff Mike Evans — also spoke about the graduates’ new career and the difficulties and rewards each of them will encounter.

Charles County graduate Officer Haley Holt performed the national anthem, and members of all three counties’ Honor Guard teams presented the colors. Charles County graduate Officer Trey Brown was the class speaker. Mrs. Katrina Robertson of the College of Southern Maryland spoke about an articulation agreement between the Academy and the College that provides each graduate with fifteen college credits toward a criminal justice degree. Chaplain Steve Davis of the Charles County Sheriff’s Office delivered the invocation and benediction.

During the ceremony, SMCJA instructors presented awards to graduates who excelled in several categories:

The CCSO was accredited by the Commission on Accreditation for Law Enforcement Agencies, Inc. (CALEA) in 2001 and has since earned the highest rating of Excellence. Established in 1658, the CCSO is one of the oldest law enforcement agencies in the United States. For more information, visit www.ccso.us.