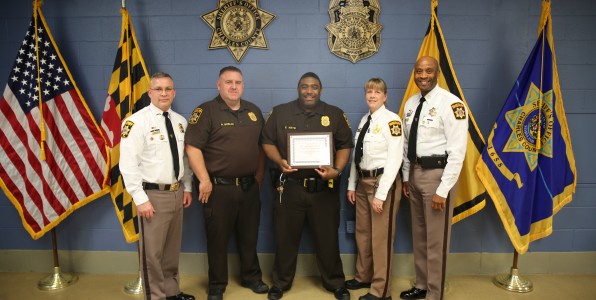 CFC Keys serves as a Senior Transport Officer, having the responsibility to ensure the safe and secure transport of inmates. He was nominated for Officer of the Year by his supervisor, Sergeant Raymond Boelke, who said “CFC Keys is well known throughout the agency and is respected by many for his positive attitude and happy disposition.” CFC Keys completed Mentor training in 2019 and is repeatedly recognized by supervisors for his teamwork, encouragement to his fellow officers, and for always going above and beyond.

One particular event in 2019 stands out most for CFC Keys. On March 13, 2019, CFC Keys was riding as a passenger while transporting an inmate from Baltimore County. Cpl. Phillip Norris was driving. While they were on Route 301 in Upper Marlboro in Prince George’s County, the officers observed an SUV that had struck a tree and was actively on fire with a female driver behind the wheel. Cpl. Norris safely pulled the transport vehicle to the shoulder of Route 301, at which time CFC Keys exited the vehicle and retrieved the fire extinguisher from the rear of the van. He ran towards the SUV, along with other citizens, and attempted to extinguish the fire. When the fire would not go out, CFC Keys broke out the driver side window with his ASP baton. He and the citizens removed the female victim from the vehicle and pulled her to a safe area away from the SUV, which was still on fire. CFC Keys then performed chest compressions on the victim for several minutes until she began to breathe and Prince George’s County Police, Fire, and EMS arrived. The victim survived with only some bruised and broken ribs, thanks to the quick and selfless action by CFC Keys. For the courage he demonstrated during this incident, CFC Keys was awarded the Bronze Medal of Valor by the CCSO in October 2019 at the Annual Awards & Retirement Banquet. He was also honored by the Prince George’s County Police Department at the Chief’s Awards Ceremony in November 2019, and was named the Officer of the Year by the Waldorf Moose Lodge in 2019.

“CFC Keys is a true professional, and we are proud of the way he demonstrates CCSO Pride both within the Agency and out in the community,” said Sheriff Berry.

“It is truly an honor to name CFC Keys the Correctional Officer of the Year for 2019,” said CCDC Director Brandon Foster. “His hard work and positive attitude impact everyone that has the opportunity to work with him.”