As another year has ended and we embark upon a new decade, Sheriff Troy Berry and the Charles County Sheriff’s Office reflect on the successes of 2019. Several accomplishments and events stand out most: crime in Charles County is down; new technology has been implemented to aid in criminal investigations; we continue to make strides in our fight against the opioid epidemic; officers and employees were recognized for outstanding work; and we further strengthened our ties with the community and local youth.

Decrease in Crime: Crime continues to decrease in Charles County. Violent crime in 2019 was down nearly two percent from 2018 and was 7.5 percent lower than the five year average. The change since 2009 is even more drastic: violent crime in Charles County has decreased nearly 30 percent in 10 years. “Many people and organizations have a role in crime prevention. Each and every one of the CCSO’s nearly 700 employees support our mission to protect life and property” said Sheriff Berry. “We work proactively with allied agencies to address crime trends. Local organizations and many citizens also aid in crime prevention. It truly is a team effort.” The CCSO was again recognized this year by the Governor’s Office of Crime Control and Prevention for outstanding crime prevention programs.

New Ways to Investigate Crimes: 2019 brought the implementation of new programs and technology to help solve crimes. In May, the Agency unveiled its newly acquired Digital Forensic Unit (DFU), which is currently overseen by Captain Joseph Pratta, Commander of the Criminal Investigations Division, and comprised of two full-time digital analyst experts. “Our examiners have 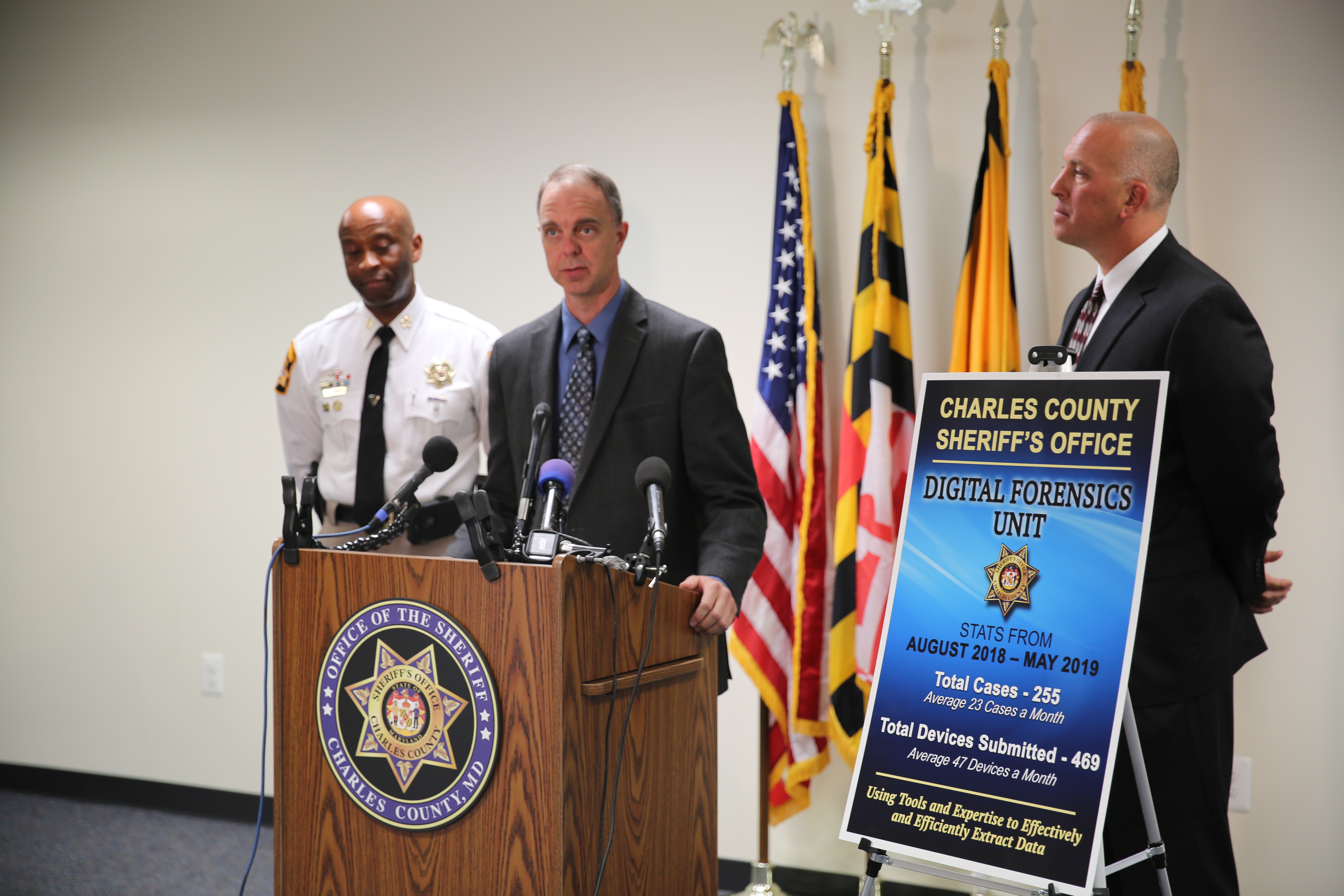 had the opportunity to make significant contributions to our investigations.  Along the way, they’ve educated detectives on collection of evidence and where that evidence hides on digital devices. They’ve advised Assistant State’s Attorneys on technical aspects of digital evidence for successful prosecutions. In a very short time, this new unit has become a successful and critical asset of the Criminal Investigations Division,” Sheriff Berry said.

In December, our Forensic Science Unit announced that it would be utilizing the National Integrated Ballistic Information Network (NIBIN) – a program managed by the Bureau of Alcohol, Tobacco, Firearms, and Explosives (ATF). The NIBIN program automates ballistics evaluations and provides actionable investigative leads in a timely manner by allowing forensic examiners to compare ballistic evidence to crimes throughout the region. “Being able to use the NIBIN system will expedite our investigations and quickly help us determine if cases could be linked, thus providing more leads to unsolved crimes,” said Sheriff Berry.

Decrease in Overdoses: Over the past several years, Sheriff Berry has made raising awareness of the opioid crisis a priority for the CCSO. In 2017, sign boards were installed in several places around the county to display the total number of overdoses reported, number of lives lost, and the number of lives saved by Narcan. In 2018, the CCSO unveiled the HOPE (Heroin Overdose Prevention Education) trailer. This mobile educational tool was designed to raise awareness and inform parents of the warning signs related to drug abuse. Since 2017, overdose deaths in Charles County have decreased by more than 36 percent. “We truly care about our community and increasing awareness about the dangers of heroin and opioids,” said Sheriff Berry. “We will not stop until the number of overdoses stays at zero and all of the criminals distributing this poison are held accountable.”

Meritorious Service: In early November, 41 CCSO employees were honored at a banquet for saving lives, bravery, superior field service, and going above and beyond in their job duties. There were also 24 retirees honored at the banquet, who served a combined 585 years at the Charles County Sheriff’s Office. Of the award recipients, one officer received a medal of valor, our highest honor. CFC Eric Keys was awarded the Bronze Medal of Valor for his actions on March 13, 2019, which saved the life of a woman who was trapped in a burning vehicle. Cpl. Phillip Norris received a Meritorious Service Award for his actions in this incident. Both officers were recognized throughout the year by various organizations for their heroic efforts.

Officers also received accolades throughout the year from the CCSO and other organizations. In early May, PFC Michael Wagner was named the American Legion’s Law Enforcement Officer of the Year for 2018. PFC Wagner was nominated for this prestigious award as a result of his actions on February 21, 2018, which directly contributed to the capture of the killer of a police officer from a neighboring jurisdiction. The CCSO presented PFC Wagner with the Bronze Medal of Valor in 2018 for his actions during this incident. Also in May, CFC Al Davis was named the 2018 Correctional Officer of the Year for the Charles County Detention Center for his contributions to the Corrections Division as well as for his tireless volunteer work in the community. Captain David Kelly was recognized as Deputy of the Year by the Maryland Sheriff’s Association in the category of Contributions to Profession during the MSA’s annual conference in September. Captain Kelly, who is also an FAA certified pilot, established the Agency’s unmanned aerial system (UAS/drones) program, developed policies and coordinated training to get the program in compliance with FAA regulations. His research and work with UASs has been so successful that agencies throughout the DC metropolitan region have requested and received guidance from Captain Kelly and his team. Corporal Brad Saunders was also recognized by the Maryland Sheriff’s Association for his work in establishing and monitoring the Agency’s new Tow Program, which went into effect in 2018 after other Traffic Operations officers successfully pushed for legislation mandating all tow companies in Charles County be registered through the CCSO. Cpl. Saunders received the Traffic Safety Award for these efforts. In November, PFC Richard Pickeral was named Law Enforcement Officer of the Year, Waldorf district, by the Knights of Columbus. He was honored for being a good patrol officer who provides outstanding service in the areas of investigations, recovered stolen autos, and narcotics.

Community Outreach: The CCSO continued its partnerships with organizations such as the Center for Abused Persons (CAP), Charles County Crime Solvers, Parents Affected by Addiction (PABA), Special Olympics Maryland, and Lifestyles of Maryland. Citizens showed their support by participating in events such as the Crime Watch Kickoff, Citizens Advisory Council Meetings, the Law Enforcement Torch Run, and National Night Out. We hosted our fourth Citizens Police Academy, a free 12-week program in which citizens are invited to apply to participate to learn all about the functions of the Sheriff’s Office. 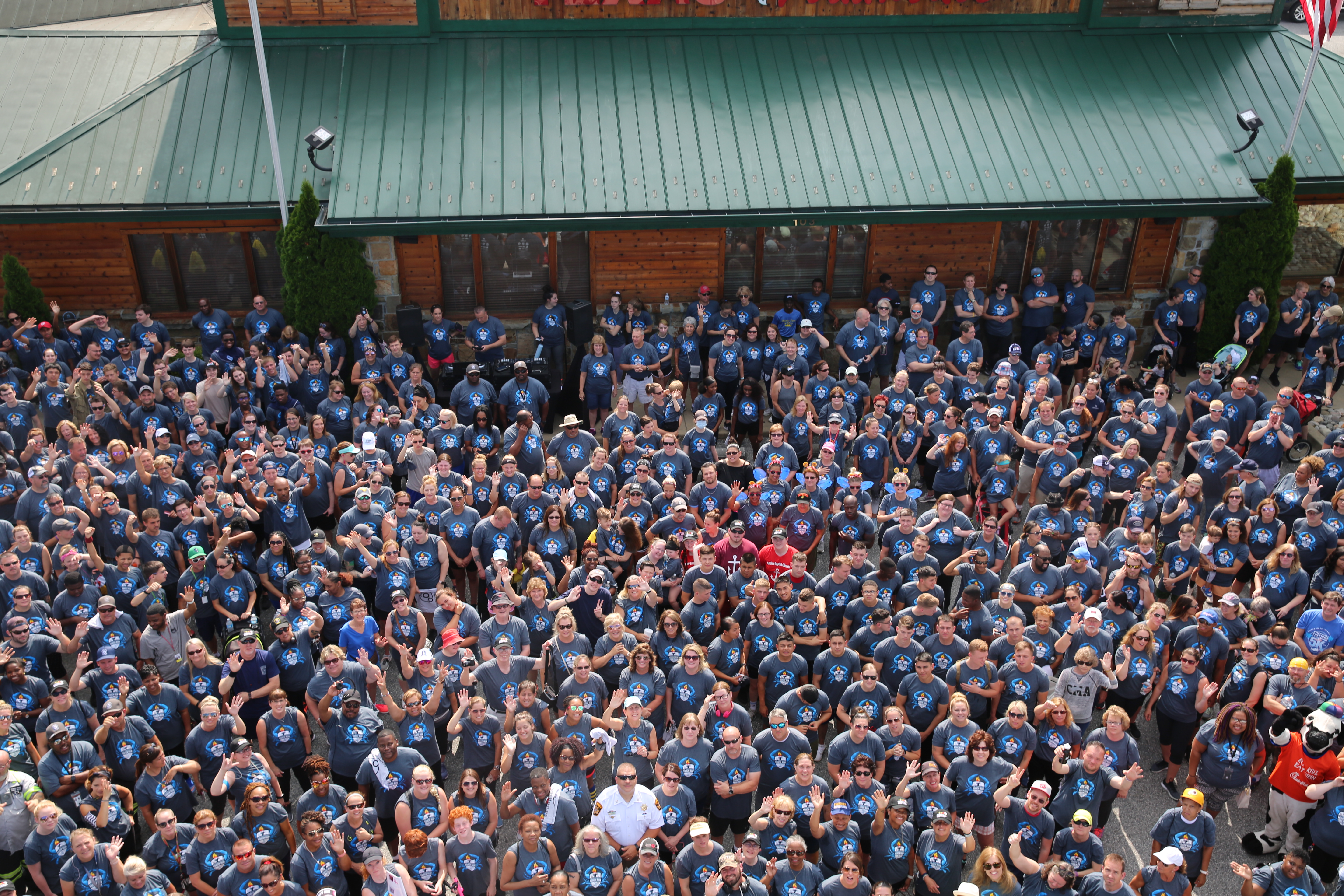 The CCSO, along with the Charles County Correctional Officers Association (CCCOA) and the Charles County Black Officers Association (CCBOA), participated in many outreach projects including the Children’s Aid Society’s Christmas Connection Program, the United Way of Charles County’s annual “Day of Caring,” and Special Olympics Maryland through fundraising at the Torch Run in June and Cops on Rooftops in September. The Corrections Division spearheaded many of its own outreach projects, to include the annual Toy Drive in support of Christmas Connection. In 2019 they raised their record high of over $12,000 in toy donations. They also hosted their annual Reentry Fair for inmates preparing for release and a Christmas in April project. On December 7, the Charles County Fraternal Order of Police, Lodge 24 hosted its 12th annual Shop with a Cop event with help from members of the CCSO, La Plata Police Department, Maryland State Police, and Maryland Transportation Authority Police (Harry Nice Bridge), taking more than 60 Charles County children to Walmart where each child was able to purchase gifts for themselves and their families. The K9 Unit spearheaded Operation Santa Paws, in which they got together and pitched in their own money to provide a special Christmas surprise for a local family.

“The organizations, businesses, and volunteers we work with in our community to give back are a driving force in our success as an Agency,” said Sheriff Berry. “It is through those critical partnerships that we are better able to protect and serve.”

Engaging with our Youth: Reaching out to the youth in Charles County remained a top priority for Sheriff Berry and the men and women of the CCSO. For the fourth straight year, Sheriff Berry visited each and every elementary and middle school in Charles County in order to conduct “wellness visits.” “My desire to become a police officer began when I was in elementary school. An officer came to my school to talk to me and it meant the world to me,” says Sheriff Berry. “Visiting our schools is a way that I try to pay back what that officer did for me.” 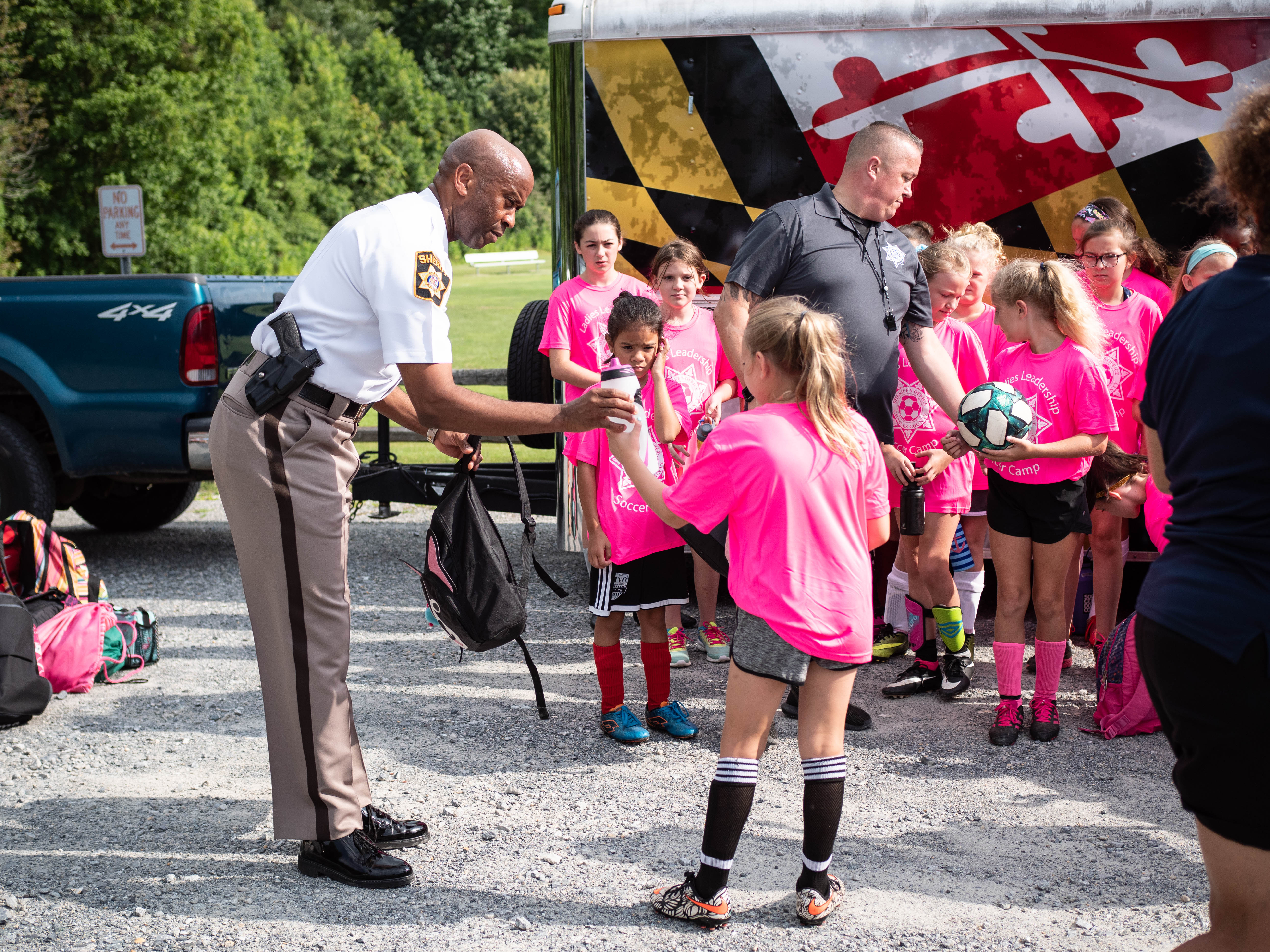 Other officers and employees also took part in strengthening relationships with our youth. Many officers participated in Career Days or other special events at the schools. Our School Resource Unit continued its tradition of hosting several camps for the elementary and middle school students over the summer. In June, after school let out, they kicked off the summer with the Cops for Kids football camp at North Point High School. In July they hosted the Ladies Leadership soccer camp and the Badges for Baseball camp, which both took place at Laurel Springs Regional Park. They also hosted the Summer Youth Achievement Program for four weeks at St. Charles High School, and the Just Say No Camp in August at the College of Southern Maryland. Officers assisted with programs to provide free lunch to students over the summer, and others helped with providing backpacks before school started back up in September. The We Care Safe Driving Program also continued last year, encouraging teen drivers to buckle up, slow down, and keep their attention on the road.

“The CCSO continues to grow in numbers, but remains a close family with strong ties to our community,” said Sheriff Berry. “I am proud of what we accomplished in 2019, and I look forward to what a new decade will bring.”