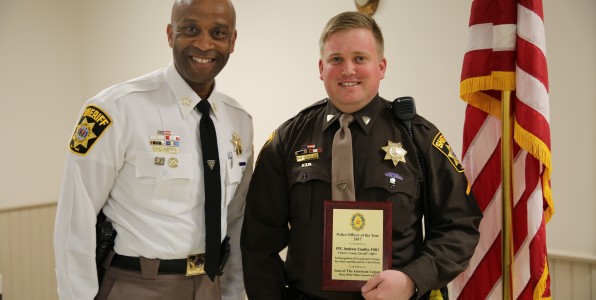 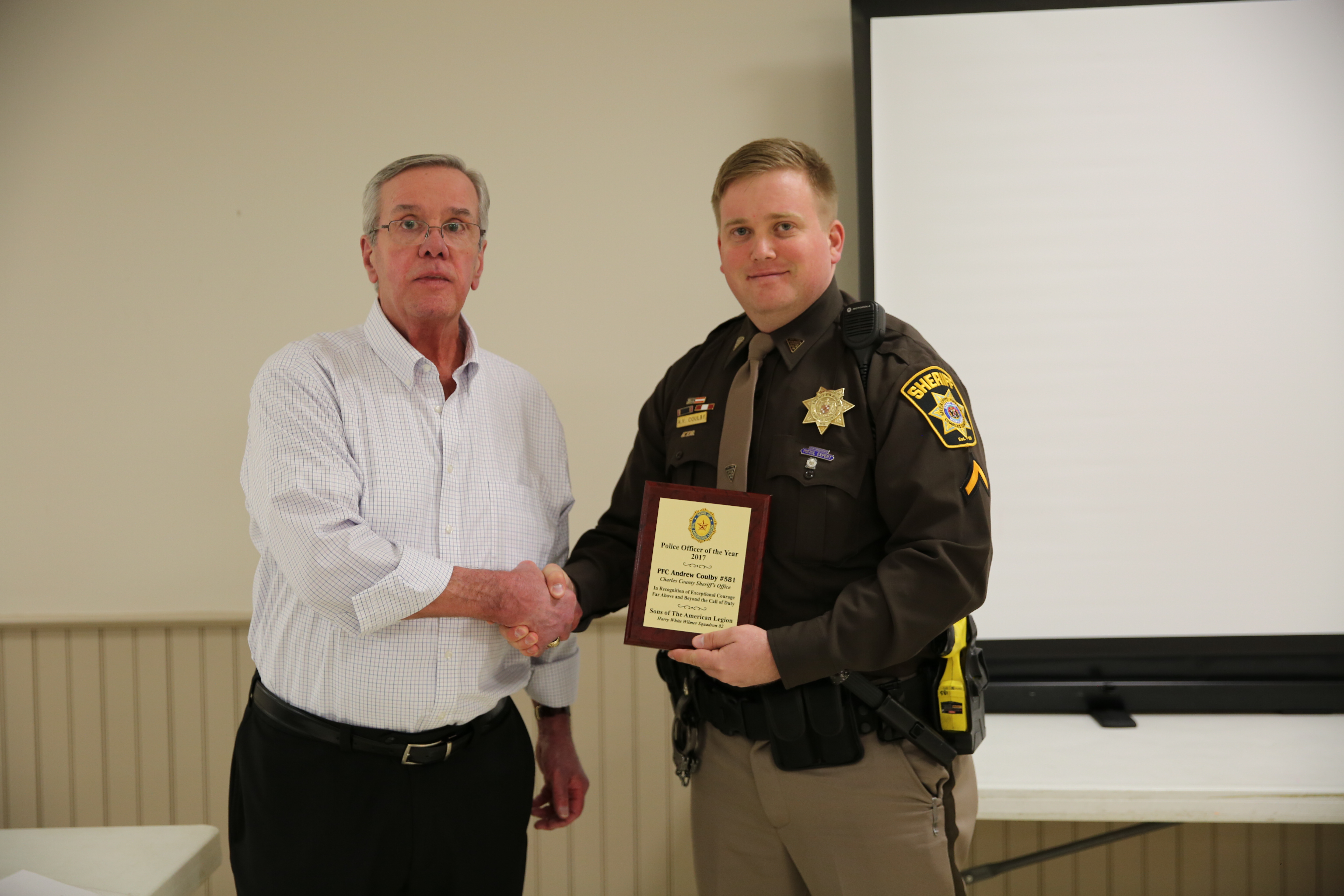 Sons of the American Legion (Squadron 82) Police Officer of the Year for 2017. Commander David Tatman presented an award plaque to PFC Coulby during the CCSO Crime Watch Kickoff event on March 14. “We appreciate the work all officers do. We selected PFC Coulby due to the extraordinary bravery and courage he displayed when responding to the scene of a murder/suicide in March 2017,” said Commander Tatman. “He had no idea what was waiting for him on the other side of that door, but he went in anyways without a second thought for his own safety.”

On March 23, 2017, officers were dispatched to the 3300 block of Westdale Court in Waldorf for the report of a shooting. PFC Andrew Coulby, who was training a brand new officer, arrived first. He quickly evaluated the threat and established a perimeter, all while speaking with a severely injured victim. After learning there were children inside the townhouse that may be in immediate danger, PFC Coulby notified arriving officers as well as police dispatchers that he was going to enter the residence to ensure their safety despite not knowing what was on the other side of the door.

PFC Coulby quickly moved through the house and up the stairs where he located a four-year-old girl with multiple gunshot wounds. PFC Coulby assessed her condition and determined she was deceased. He continued searching the upstairs where he found a 17-year-old girl in the bathroom; she had been shot numerous times and was unconscious, but breathing. PFC Coulby radioed this information to dispatchers and stayed with the girl to comfort her and protect her while additional officers cleared the house and until emergency medical personnel arrived on scene. The teen was transported to a hospital where, sadly, she died of her injuries.

“We appreciate and thank the Sons of the American Legion Squadron 82 for recognizing PFC Coulby with this honor,” said Sheriff Berry. PFC Coulby was also honored at a CCSO awards banquet last fall, where he received a Bronze Medal of Valor recognizing the actions he took in this case.

Charles County Crime Solvers offers rewards of up to $1,000 for information that leads to the arrest or indictment of a person responsible for a crime in Charles County. All individuals who provide tips through Crime Solvers will remain anonymous. Anyone with information about an unsolved crime or the location of a fugitive may contact Charles County Crime Solvers by calling 1-866-411-TIPS. Tips can be submitted online at www.charlescountycrimesolvers.com or by using the P3Intel mobile app, which can be found in the Android Store and Apple store by searching P3tips. For more information about the P3 program, click on this link: www.p3intel.com.