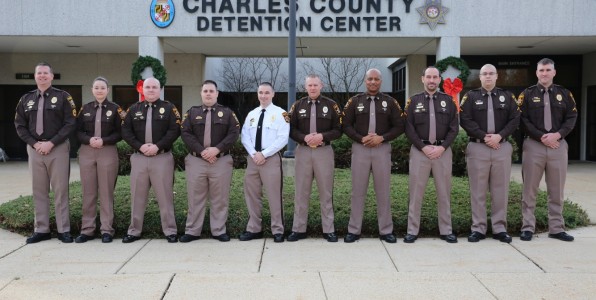 The Charles County Sheriff’s Office Corrections Division recently rolled out a program aimed at supporting new correctional officers through their first year of service. The newly created Peer Mentor Program, spearheaded by Lt. Matthew Irby, was engineered to provide a physical model of the agency’s core values – professionalism, respect, integrity, duty and excellence – for newer officers who would benefit from seeing these values at work early on in their careers. “The Peer Mentor Program was developed as a way to increase job satisfaction and retention,” said Charles County Detention Center Director Brandon Foster. “It is our hope that this program will help new officers hit the ground running and feel confident in their abilities.”

The initial process, which begins immediately following the completion of the Corrections Field Training Officer Program, builds on the positive attitudes and actions created during field training and lasts for approximately the first year of service. One of the key factors of the program also focuses on active and effective goal-setting. In the first several weeks of the process, officers work with their mentors to create goals and benchmarks to be completed within the first two years of service. Over the course of the first six months, evaluation of goal progress is measured and an additional 5-year goal is created in order to encourage positive habits and forward thinking.

“I always say that Correctional Officers walk one of the toughest beats in law enforcement. It’s so important that we help them get acclimated to the job and encourage them to develop their leadership abilities later on,” said Sheriff Troy Berry. “I’m very proud of this initiative by our Corrections Division to support and retain new and veteran officers.”