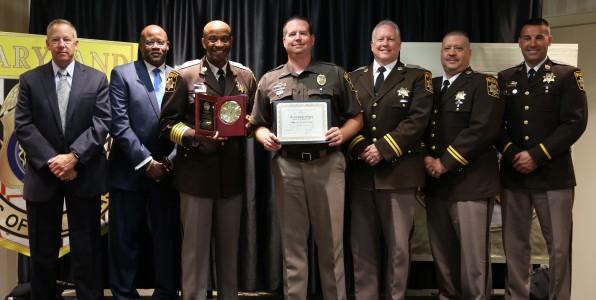 On Monday, September 11, Master Corporal Shawn Gregory was named the Correctional Officer of the Year by the Maryland Sheriffs’ Association and Maryland Chiefs of Police Association at their annual conference held in Ocean City, MD. The award was presented by Maryland Governor Larry Hogan, Riverdale Park Police Chief David Morris, President of the MD Chiefs of Police Association, and St. Mary’s County Sheriff Tim Cameron, President of the MD Sheriffs’ Association. In total, 18 officers from all over Maryland were honored at the ceremony in various categories.

M/Cpl. Gregory, who was named Correctional Officer of the Year earlier this year by the Charles County Sheriff’s Office, began his career in Corrections in December of 2001 and has been a member of the Emergency Response Team (ERT) since 2002. He has been recognized for his outstanding leadership abilities on the ERT and willingness to coordinate training scenarios, as well as pursue training opportunities available to him. M/Cpl. Gregory is also a member of the Charles County Correctional Officers Association and serves in dual roles as the Vice President and Sergeant at Arms. He continually demonstrates his commitment to community service by participating in the Christmas in April program, visiting local high schools to put on demonstrations, and coordinating the first ever Family Tour Day at the CCDC for CCSO employees and family members.

Members of the Charles County Sheriff’s Office Command Staff were in Ocean City to congratulate M/Cpl. Gregory on this prestigious award.

“We were so proud to see M/Cpl. Gregory recognized at the statewide level for the outstanding work that he has done in Charles County,” said Sheriff Berry. “We’d like to thank the Maryland Sheriffs’ and the Maryland Chiefs of Police Associations for honoring these individuals who go the extra mile to make Maryland a better, safer place.”