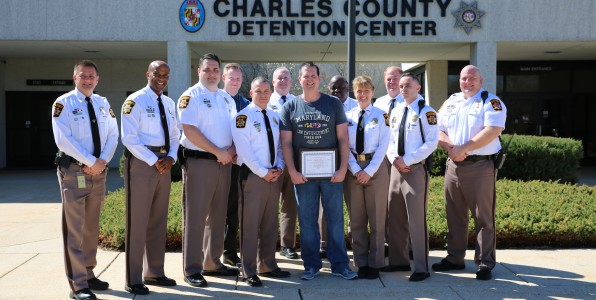 Charles County Detention Center Director Brandon Foster, along with Sheriff Troy Berry and members of the CCSO and CCDC command staff, are proud to announce that Master Corporal Shawn Gregory has been named the 2016 Correctional Officer of the Year. M/Cpl. Gregory was presented his award at a ceremony held last week.

M/Cpl. Gregory began his career in Corrections in December of 2001 and has been a member of the Emergency Response Team (ERT) since 2002. He has been recognized for his outstanding leadership abilities on the ERT and willingness to coordinate training scenarios, as well as pursue training opportunities available to him. M/Cpl. Gregory also serves on the Charles County Correctional Officers Association in dual roles as the Vice President and Sergeant at Arms. He continually demonstrates his commitment to community service by participating in the Christmas in April program, visiting local high schools to put on demonstrations, and, most recently, coordinating the first ever Family Tour Day at the CCDC for CCSO employees and family members.

“We are so proud of the work that M/Cpl. Gregory and the rest of our Correctional Officers are doing day in and day out,” said Sheriff Berry. “Their role of keeping our inmate population safe, as well as helping them get back on their feet to reduce recidivism, has a significant impact on our community.”

“Besides being remarkably caring, M/Cpl. Gregory’s dedication and commitment are qualities he mirrors in his work ethic,” said CCDC Director Brandon Foster. “He is respected by his peers, agency, staff, and the inmate population.”

Perhaps most telling are these words, penned by an inmate, “He treats us with dignity and respect, all the while maintaining appropriate boundaries between inmate and staff. He is a pure professional and deserves to be recognized for it.”