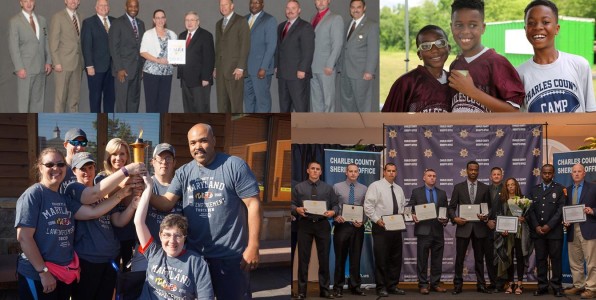 Charles County, MD…With 2016 now over, the Charles County Sheriff’s Office is looking to build on past successes and move forward with a safe and enriched 2017. Taking a look back at our accomplishments over the past 12 months, safety, a gold standard reaccreditation, and community engagement top the list.

Crime Numbers: Preliminary crime numbers show that while some categories of crime increased, overall, crime decreased. “We are encouraged by this downward trend in Charles County, and official numbers will be released when they are available. The CCSO will continue to strengthen our relationship with the community through our various programs,” said Sheriff Troy D. Berry.  The CCSO was recognized in December 2016 by the Governor’s Office of Crime Control and Prevention for outstanding crime prevention programs.

Community Partnerships: “We can’t do this alone,” said Sheriff Berry. “There are so many people and partnerships that help keep our county safe and help people in need.” Organizations such as the Center for Abused Persons (CAP), Charles County Crime Solvers, and Lifestyles of Maryland strengthen crime fighting efforts. At the annual CAP breakfast in October, men from throughout the county were honored for making a positive difference in domestic violence prevention. In November, officers joined forces with Lifestyles during their annual Safe Nights program to assist the homeless in Charles County. In December, the agency joined board members of the Charles County Crime Solvers at their annual banquet and thanked the outgoing executive board members for their leadership and welcomed a new, incoming board of directors who will carry on their mission of providing rewards to tipsters who help solve crimes.  In addition, members from all neighborhoods across the county joined the agency for quarterly crime watch meetings.

Gold Standard Accreditation: As the world watched the 2016 Summer Olympics in Rio, the CCSO won “gold” of its own. In August, the CCSO underwent a rigorous reaccreditation process by the Commission on Accreditation for Law Enforcement Agencies (CALEA), and, after a thorough review of agency policies and procedures, received the Gold Standard Accreditation with a Meritorious Award. The Charles County Detention Center (CCDC) also achieved notable status in 2016 by earning a 100 percent compliance rating during an audit conducted by the Maryland Commission on Correctional Standards (MCCS).

School Resource Officers and Youth Engagement: While many locals were cheering on the Washington Redskins or the Baltimore Ravens, the CCSO was cheering on former NFL greats Rod Milstead and Gary Clark who graciously joined our team of School Resource Officers (SRO) for the annual Cops for Kids football camp during which Clark and Milstead made appearances and spoke to more than 90 students about the importance of teamwork, discipline and respect. While the Chicago Cubs were on their way to winning the World Series, the SRO’s hosted more than 70 Charles County students at the annual Badges for Baseball camp.  Sponsored by the Cal Ripken, Jr. Foundation, Southern Maryland Blue Crabs, Diamond Dream Foundation, and Charles County Public Schools, SRO’s joined players from the Blue Crabs and Major League Baseball legends Fred Valentine (Baltimore Orioles and Washington Senators) and Alonza Bumbry (Baltimore Orioles) to coach students in baseball skills and teach them about working as a team. As our region cheered on the Washington Wizards, SRO’s hosted a basketball clinic for 60 students at a free 2-day basketball camp at St. Charles High School at the end of December. The students did basketball skills and drills and also learned what it takes to work hard for a goal. Coaches and players from the Beltway Bombers, a local American Professional Basketball League (APBL) team, assisted.

A Sense of Duty and Volunteerism: In a snapshot for 2016, members of the CCSO raised more than $70,000 for Special Olympics Maryland by hosting the Charles County leg of the Law Enforcement Torch Run, Cops on Rooftops, and the Zombie Invasion 5K. They repaired an elderly woman’s home during the Christmas in April program; they joined more than 150 communities for National Night Out; organized a work skills class and reentry program for inmates who were getting ready to be released; supported breast cancer survivors at Sisters at Heart; participated in fundraisers for Hospice of Charles County, the Walk for the Homeless, and Run 4 Ryan. In September, the Agency started the first Citizens Police Academy class with 21 members of the community who committed to ten weeks of training relating to police work. And during the latter part of the year, thousands of toys, coats, mittens and shoes were provided for families in need thanks to the Charles County Correctional Officers Association (CCCOA) and the Charles County Black Officers Association (CCBOA). In December, the Charles County Fraternal Order of Police, Lodge 24 hosted its annual Shop with a Cop event with the help from members of the La Plata Police, Maryland State Police, and Maryland Transportation Authority (Harry Nice Bridge) taking 80 children from Charles County to Walmart where each child was able to purchase something they needed, something they wanted, and something for a family member.

A continuing highlight for the CCSO is the many employees who volunteer their own time to help the communities they serve. Staff members volunteer with local fire and EMS crews. Others spend their time mentoring children and young adults as coaches or camp counselors. Employees also volunteer with the Department of Social Services, Humane Society, Hospice of Charles County, Crime Solvers, Special Olympics Maryland, Center for Abused Persons, and the United Way, to name a few.

Acts of Bravery, Outstanding Field Work and Life-Saving Events: In October, CCSO employees were honored at a banquet for saving lives, bravery, superior field service, and going above and beyond in their job duties. Officer Lamar Hamilton received the Silver Medal of Valor at the annual Awards & Retirement Banquet for risking his life to save children who were trapped in a burning car. Cpl. William Saunders, Pfc. Justin Bottorf, POII Matthew Nauman, MSP Trooper Matthew Milich, and firefighter Woodrow Price received Bronze Medals of Valor for their bravery in this case and M/Cpl. Jason Hopkins and Ms. Yolanda Davis received Lifesaving awards for assisting in this dangerous situation.

Social Media – We Went Viral, Twice: With more than 2.4 billion people on social media every day, it’s hard to imagine that the CCSO went viral twice in one year! Once was for a photo that was snapped when a rookie police officer, Brandon Morrison, took the hand of an elderly woman who had dementia and was lost. He walked her home, without ever telling her she had been reported missing. This photo captured the dignity the officer gave the woman. With a hashtag of #respectthosewithdementia, the post reached more than 10 million people, had 223,000 likes and more than 51,000 shares. Another post that went viral was a video of Corporal Juan Morales dancing with a complete stranger in a mall parking lot to the tune of “Shake it Off” by Taylor Swift. The citizen who joined Corporal Morales was laughing so hard, people couldn’t help but laugh themselves. The post reached more than 3 million people, had 7.4K likes and more than 16,000 shares. In other news, we tweeted, posted, and shared more than we have in years past, and gained followers on our Facebook, Twitter, and Instagram pages. In fact, our Facebook page generated buzz among the news media for topping the charts with community interaction. We also became active on Nextdoor, a private social network site for neighbors and communities.

Feeling fortunate: “We feel fortunate to be part of a wonderful community. Overall, we have been blessed by so many people who have stopped by our stations to drop off baked goods or pass out cards with words of encouragement. Many people shake hands with us and some give us hugs. The kindness shown to us during a difficult time for law enforcement is so encouraging to the officers and civilian employees of our agency,” said Sheriff Berry. “This support undoubtedly contributed to our success in terms of community relations. We are so grateful to serve in Charles County and we look forward to a new year and new friendships.”