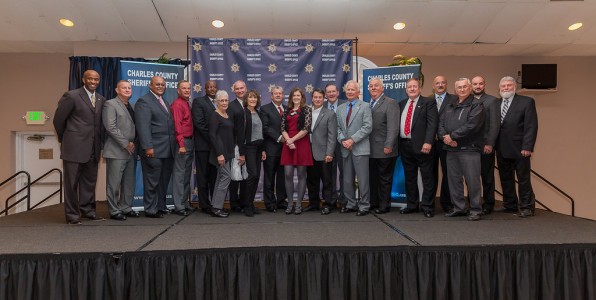 Charles County Sheriff Troy D. Berry honored 11 retirees and 61 award recipients at a banquet at the Waldorf Jaycees Community Center. Honorees were recognized for completion of service to the Agency, excellent field work, or acts of bravery. Mr. William Saunders, a retired police captain, served as the Master of Ceremonies. The Charles County Sheriff’s Office Honor Guard presented Colors; Mrs. Jennifer Voorhaar sang the National Anthem; Dr. Aaron Jones, a CCSO Chaplain, delivered the invocation; and Dr. Bruce Jones, a CCSO Chaplain, delivered the benediction. “It is an honor to work with the men and women of the CCSO, and our award winners and retirees represent some of the best,” said Sheriff Berry. “Their dedication to service has made a lasting impact on our agency, and we congratulate them on their success.”

Shortly before midnight on September 2, 2016, officers responded to a single vehicle accident on St. Charles Parkway south of Northgate Place. As officers began arriving on the scene, they discovered a vehicle had run off the roadway and struck a tree. The engine compartment wa 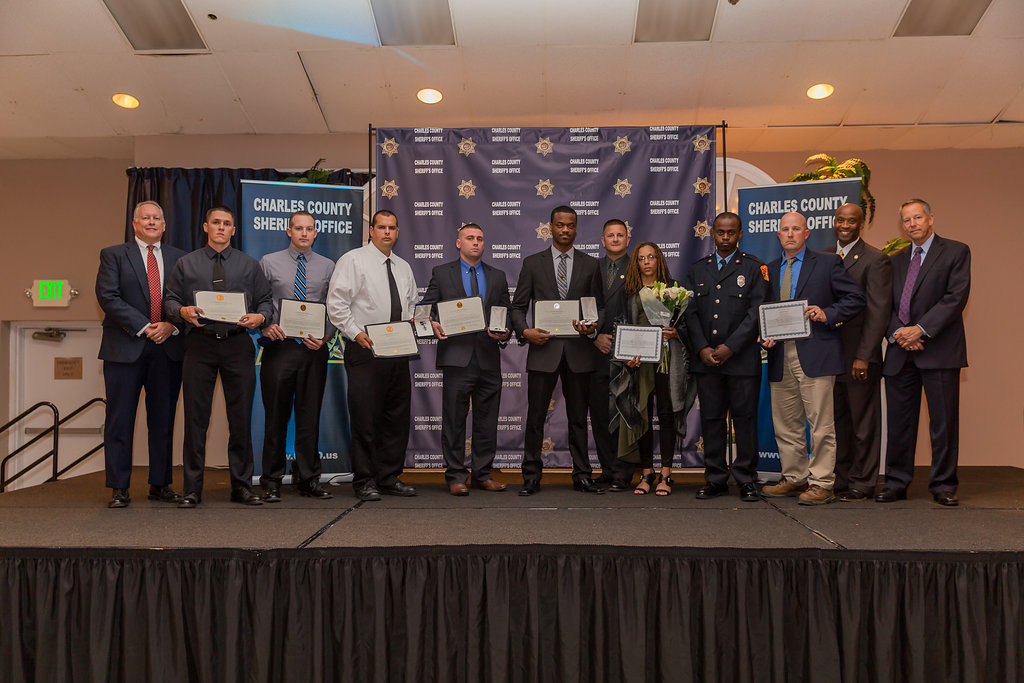 s fully engulfed in flames. An adult female and two infant children were trapped inside the burning car. The driver, an adult male who suffered numerous leg fractures in the accident, was seated outside of the vehicle. An adult female passenger, who was apparently ejected from the vehicle and suffering from numerous injuries to include a serious facial injury, was located later. As Corporal Saunders and Officer Nauman used their Agency-issued fire extinguishers to fight the blaze, Officer Bottorf arrived and dragged the driver to safety. In order to save the two trapped children, Officer Hamilton entered the burning vehicle, removed the children from the vehicle, and handed one child to Officer Nauman and the other to MSP Trooper Milich. Both children were taken to a safe area away from danger. Officers then attempted to free the adult female who was still trapped in the front passenger seat. It was clear she was in imminent danger and that she had already been burned by the flames. The fire forced the officers back. With the vehicle still burning and flames now touching the woman, Cpl. Saunders used a fire extinguisher to keep the flames away from her as much as possible until firefighters arrived. Ms. Davis, a citizen who lives nearby, saw the fire, grabbed a fire extinguisher out of her house, and brought it to officers. Ms. Davis then saw the infants on the ground, and she immediately went to aid one of the babies by comforting and talking to her.

Upon the arrival of Waldorf Volunteer Fire Department, Station 3, firefighters took over battling the fire. It was then that Mr. Price – a volunteer firefighter/EMT –provided air to the pinned passenger as she struggled to breathe. This act placed Price in severe danger from smoke inhalation, but he remained with female. It was clear she already suffered severe burns to her legs. Once the fire was extinguished, firefighters were able to get her out of the vehicle to safety.

A massive undertaking was underway to coordinate three emergency medical helicopters to transport the five patients who were suffering from critical injuries, including fractured bones, a fractured skull, and second and third-degree burns. All five occupants of the vehicle were treated on the scene and stabilized by EMTs and two CCSO Officers. Cpl. Saunders, who is a certified EMT, administered oxygen to both infants. M/Cpl. Hopkins, who is also a trained paramedic and located the ejected passenger, provided advanced lifesaving care to her. As a direct result of the medical aid he provided, the woman survived. When the helicopters arrived, M/Cpl. Hopkins remained with his victim as she was flown from the scene to Washington Hospital Center.

All five occupants of the vehicle survived due to the heroic efforts of these men and women. For the lifesaving care they provided, M/Cpl. Hopkins and Ms. Davis received the Lifesaving Award. For their bravery, exposing themselves to a high level of danger and risking serious injury or death in saving the lives of those trapped in the vehicle, Cpl. Saunders, Officer Bottorf, Officer Nauman, Trooper Milich, and Mr. Price received the Bronze Medal of Valor. And for his courageous act above and beyond the call of duty, knowingly putting himself in harm’s way and risking his own life to save another, Officer Hamilton was awarded the Silver Medal of Valor.

Pfc. Larry Blake and Mr. Jonathan Wynn: On February 4, 2016, PFC Blake was driving southbound on St. Charles Parkway when he observed a male subject standing at the driver’s side door of a stopped vehicle at the light at Post Office Road.  Because it appeared the subject was attempted to gain entry into the vehicle, PFC Blake made a U-turn and approached the intersection to investigate.  As PFC Blake was exiting his vehicle, the subject began to flee.  These events attracted the attention of an off-duty United States Secret Service Agent, Jonathan M. Wynn, who stopped to provide assistance.  Pfc. Blake and Agent Wynn pursued the suspect on foot.  As they closed on the suspect, PFC Blake observed him reaching into his waistband as if to pull a weapon.  PFC Blake then ordered him to show his hands.  Fearing for his safety after the suspect failed to comply, PFC Blake fired his service weapon, striking the suspect. The suspect fell to the ground, but he resisted attempts by PFC Blake and Agent Wynn to secure him.  Once the suspect was handcuffed, a stolen .380 semi-automatic handgun was located on his person.  A vial of PCP that had been tossed by the suspect was also located nearby.  It was later learned that the 70-year-old male driver of the vehicle that was stopped at Post Office Road believed the suspect was attempting to carjack him.

PFC Blake and Agent Wynn placed themselves in significant risk of injury or worse to protect the citizens of Charles County.  Their actions demonstrate great courage and professionalism in the face of danger.

The actions of M/Cpl. McCue in confronting a suspect with an assault rifle placed him in danger and may have saved innocent lives.

The officers were faced with a very dangerous situation to themselves and to the suspect, but their quick thinking and actions ended the conflict with the least amount of force.

Detective Gregory displayed the highest level of professionalism, investigative skill, and diligence during this investigation, closing the case with an arrest only nine days after the first robbery occurred.

As of July 21, 2016, all patients had been released from the hospital.  Because of Sgt. Becker’s quick actions and exemplary performance during this accident, lives were protected and ultimately saved.

The student was unstrapped and removed from his wheelchair and placed on a couch.  When Pfc. Smith noticed the student was not breathing or responsive, she immediately placed him on the floor, applied the AED patches, and started chest compressions.  The school nurse administered a rescue breath as Pfc. Smith continued chest compressions for more than four minutes until M/Cpl. McCue arrived on the scene and took over. Approximately a minute later, EMS arrived and continued medical aid.  A pulse was found on the student’s trip by ambulance to Children’s National Medical Center.  The student recovered. Emergency Medical Technicians attribute the officers’ early intervention as the primary reason they were able to successfully revive the student.

The actions of Pfc. Smith and M/Cpl. McCue preserved the life of this young student and are a reflection of their commitment to the Agency and the citizens of Charles County.

There is no doubt that the quick arrival and immediate, professional handling of this situation by Pfc. Moore saved the life of this child.

Cpl. Syvertsen has worked diligently to digitize all Traffic Operations records and tracking systems, allowing the unit to focus their enforcement efforts in a more effective manner. He works tirelessly to reduce traffic crashes and educate the public on the consequences of aggressive driving. He also serves as the Agency’s Breath Test Operator Coordinator and attends training and meetings to ensure the program is correctly administered and the records are properly maintained. He has worked diligently both on and off duty to ensure the equipment of the Traffic Operations Unit functions properly. He has applied his knowledge of electronics to repair and upgrade previously unusable equipment.

Cpl. Syvertsen is an outstanding, innovative officer.  His dedication is unwavering, and he is an asset to the Traffic Operations Unit.  He is truly the embodiment of a traffic safety officer.

Ms. Gloria Bowers worked tirelessly with the County’s Finance Staff to ensure the officers were correctly compensated.  Ms. Bowers, with the assistance of the CCSO Accounting Section, completed over 900 payroll change orders and managed their workload.  Each payroll change required individual calculations.  The payroll changes were complex and included promotions, merit increases, overtime, shift differential, retirement, and other benefits.

This lengthy and complicated project is an example of the teamwork, professionalism, and commitment of civilian employees, who are an essential component of the overall success of the Charles County Sheriff’s Office.

With her assistance, the FSU has been successful in examining longstanding cold cases, re-examining previously submitted evidence to develop new leads, and developing suspect DNA profiles.  Her dedication to this partnership ensures that victims of decades-old crimes will not be forgotten and that closure may still come. Additionally, she continues to provide training on DNA collection and preservation, CODIS, and MSP laboratory procedures to both the Sheriff’s Office and the State’s Attorney’s Office.  As a result, detectives and crime scene processors have developed an advanced knowledge of the types of biological evidence to search for on crime scenes, how to preserve and package the evidence, and what evidence will be eligible for CODIS.  This knowledge and training have positively impacted the way current cases are processed and increased the probability of locating suspect DNA.