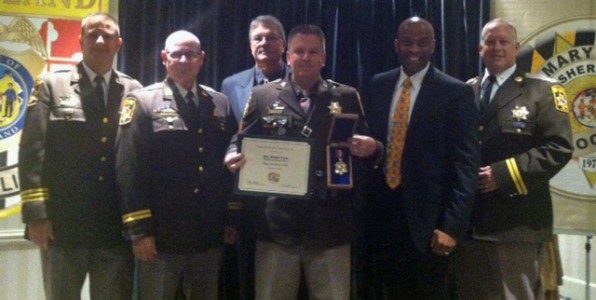 Sheriff Troy Berry and the Charles County Sheriff’s Office are proud to announce Sgt. Mike Clark has been recognized as “Deputy of the Year for Valor” by the Maryland Sheriff’s Association. Sgt. Clark was recently honored at the MSA’s annual conference for his exceptional courage far above and beyond the call of duty while on a dangerous call nearly one year ago.

On September 27, 2014, officers were dispatched for an armed suicidal subject who was intoxicated and holding a shotgun to his head while sitting alone in a vehicle. Sgt. Clark, who was assigned to the Traffic Operations Division at the time, was the first on the scene and took the lead in communicating with the subject as additional officers arrived. Sgt. Clark assured the man that officers were there to help him. Although the subject could hear Sgt. Clark, he refused to remove the gun from his face and continued speaking incoherently and crying while his finger was on the trigger. Suddenly, the man’s wife approached and attempted to put the gun on safe mode. In that moment, Sgt. Clark made a quick, selfless decision to break from cover and reach out and grab the gun from the man’s hands. The subject was subdued without incident and later transported to a hospital where he received treatment.

It was then discovered the gun was actually a rifle and was, in fact, loaded with a round in the chamber. The man was a former military member who was distraught over a domestic-related issue.

“Sgt. Clark was everything we could all hope to be in a life-or-death situation. He displayed patience, courage and true heroism,” said Sheriff Berry. “The situation would have likely ended with the loss of life had Sgt. Clark not made the split-second decision that he did, putting others’ lives before his own. We are very proud of him and the actions he took that day.”