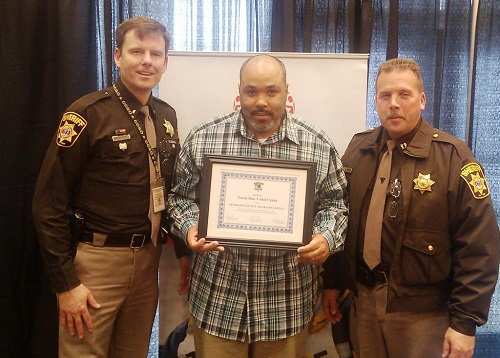 Charles County Sheriff Rex W. Coffey is pleased to announce the Charles County Sheriff’s Office was honored with an award for raising the most money in T-shirt sales for the Law Enforcement Torch Run benefitting Special Olympics Maryland. This marks the seventh consecutive year the CCSO has won the top sales award in the state.

Sgt. Gus Proctor, who coordinated the sales for the CCSO, said more than $25,000 was raised in 2013. “I love being part of this program. There are so many people who help contribute to our success. The Charles County Public Schools account for a majority of the T-shirt sales and community members and businesses are just as eager to help out,” said Sgt. Proctor. “My goal this year is to sell at least $30,000 in shirt sales,” Proctor said.

“I’m proud of Sgt. Proctor and his efforts to help Special Olympics Maryland. He puts his heart and soul into this program and he’s done an outstanding job. I believe he has probably sold a T-shirt to nearly every person in this county and all of that money is for such a good cause,” said Sheriff Coffey. “Being connected to our community is important to me and we extend a helping hand to as many community organizations as we can,” Sheriff Coffey said.

Since 2006, the CCSO has sold more than $100,000 in Torch Run T-shirts for Special Olympics Maryland. This year’s Torch Run will be held on June 5 this year. More details will be released soon.