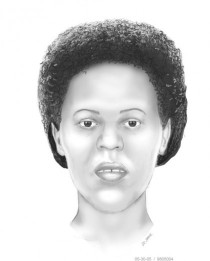 On June 16, 1998, the body of a deceased woman was located in an overgrown area off of Irving Road in Bel Alton. The woman, whose identity was unknown, was found to be the victim of a homicide.

CCSO detectives have worked with numerous police agencies throughout the country but have been unable to determine the victim's identity. The victim's fingerprints were compared to fingerprints on file with the FBI and other fingerprint databases with negative results. A facial reconstruction was completed in 2005 and the results have been distributed in hopes someone will recognize the victim. DNA and other scientific testing have been pursued in this case but the victim continues to be unidentified and listed as “Jane Doe.”

Anyone with information about the victim's identity or this crime is asked to contact Charles County Crime Solvers by calling 1-866-411-TIPS, by texting CHARLES + your tip to CRIMES (274637) or by submitting a web tip. Crime Solvers is offering a reward of up to $1,000 for information that leads to an arrest or indictment. All individuals who provide tips through Crime Solvers will remain anonymous.

Citizens are encouraged to visit CrimeReports to learn more about crimes in our county.