CRIME SOLVERS OFFERING REWARD FOR LOCATION OF SUSPECT WANTED IN VIOLENT DOMESTIC-RELATED ASSAULT: Charles County Sheriff’s detectives are seeking the whereabouts of Rayvon Maquis Drayton, 22, of Fredericksburg, VA. On August 1, Drayton brandished a handgun and assaulted a female acquaintance. He fled prior to police arrival. An arrest warrant has been obtained charging Drayton with first-degree assault. Anyone with information about Drayton’s whereabouts is asked to call (301) 932-2222. 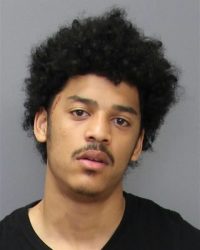 CRIME SOLVERS OFFERING CASH REWARD FOR INFORMATION IN ROBBERY CASE: Charles County Crime Solvers is offering a cash reward of up to $1,000 for information leading to the identities of the suspects involved in the robbery of a pizza delivery man. On August 5 at 12:05 a.m., officers responded to the area of Travers Road in Indian Head for the report of a robbery. Investigation showed the victim was making a delivery when he was confronted by several suspects who threatened him and demanded money. The victim complied and the suspects fled with the victim’s money. Anyone with information is asked to call Detective H. Burgess at (301) 609-6494. Tipsters wishing to remain anonymous may contact Charles County Crime Solvers by calling 1-866-411-TIPS. Tips can also be submitted online at www.charlescountycrimesolvers.com or by using the P3Intel mobile app.  The investigation is ongoing.

ARMED ROBBERY: On August 1 at 6:12 p.m., officers responded to Fillmore Road in Waldorf for the report of a citizen robbery. Investigation showed the victim and a friend were approached by the suspect who implied he had a handgun and demanded the victims’ property. The victims complied and the suspect fled. The suspect is described as a black male in his 20’s. He is approximately 6’0” tall and has a slim build. At the time of the robbery, he was wearing a white tank top, black skinny jeans, and white and yellow tennis shoes. He may have scars on his neck. Anyone with information about this case is asked to call Detective Wimberly at  (301) 609-6491. Tipsters wishing to remain anonymous may contact Charles County Crime Solvers by calling 1-866-411-TIPS. Tips can also be submitted online at www.charlescountycrimesolvers.com or by using the P3Intel mobile app. The investigation is ongoing.