On March 19 at approximately 10 a.m., a teacher at La Plata High School noticed a student who appeared to be under the influence of drugs. The teacher called school administration to the classroom and an administrator immediately responded and removed the student. Administrators subsequently discovered the student was in possession of a container of marijuana-infused brownies. They also found a loaded gun in his book bag. The School Resource Officer recovered the gun and drugs and arrested the student,  Kristopher Alexander Raul McDonald, 16, of La Plata. McDonald was charged as an adult with possession of a weapon on school property, possession of drugs with intent to distribute while armed, loaded handgun on person, carrying a concealed dangerous weapon and other related charges. Cpl. K. Burger is continuing the investigation to determine where the student got the gun and why he brought it to school. At this point in the investigation, there is no indication McDonald planned to use the weapon against anyone. Anyone with additional information is asked to contact Cpl. K. Burger at (301) 932-2222. 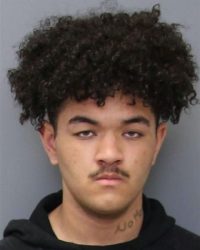