Charles County Sheriff’s detectives are seeking the identity of a woman who used a stolen credit card to make several purchases. On July 28, unknown suspect(s) entered an unlocked vehicle in the area of Blackpool Circle in Waldorf and stole a credit card that was inside. The card was used a short time later at three different locations: Waldorf Ultra Fuels, the Waldorf Wal-Mart, and the Brandywine Target. Investigators obtained surveillance footage of the transactions which showed a woman in a tank top and black baseball cap using the card (see attached). Anyone with information about the identity of the woman is asked to call Det. Horrocks at (301) 609-6549. Tipsters wishing to remain anonymous may contact Charles County Crime Solvers at 1-866-411-TIPS. A cash reward of up to $1,000 is being offered if the tip leads to an arrest in the case. The investigation is ongoing. 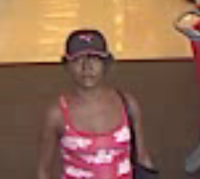