The Charles County Sheriff’s Office is continuing their investigation into the murder of a woman whose decomposing body was found in a field near Irving Road in Bel Alton on June 16, 1998.  The woman, who had no identification, has remained unidentified for 20 years, despite many efforts to establish her identity. A CCSO forensic artist has created a new sketch to enhance images of what she may have looked like in 1998 with the hopes of learning her identity and finding her killer.  The facts of the case are as follows:

On June 16, 1998, the body of a deceased woman was located in an overgrown area off Irving Road in Bel Alton. According to the Medical Examiner’s Office, the woman was the victim of a homicide.

CCSO detectives have worked with numerous police agencies throughout the country but have been unable to determine the victim’s identity. The victim’s fingerprints were compared to fingerprints on file with the FBI and other fingerprint databases with negative results.

A facial reconstruction was done in 2005 (the B&W sketch) and then again this year (color sketch), and the results have been distributed in hopes someone will recognize the victim. DNA and other scientific testing have been pursued in this case, but the victim continues to be unidentified and listed as “Jane Doe.” 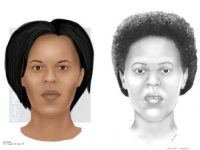 Anyone with information about the victim’s identity or this crime is asked to contact Lieutenant D. Stahl at (301) 609- 6505. Tipsters wishing to remain anonymous may contact Charles County Crime Solvers by calling 1-866-411-TIPS, or submitting an online tip at www.charlescountycrimesolvers.com or by using the P3Intel mobile app, which can be found in the Android Store and Apple store by searching P3tips. A cash reward of up to $1000 is being offered for information leading to the arrest of a suspect.