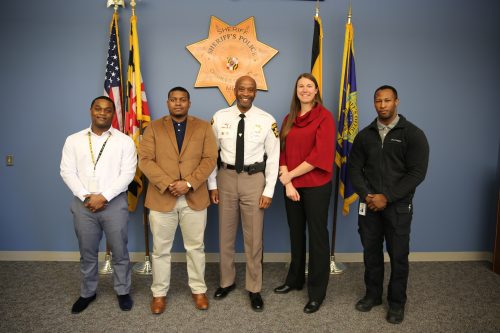 This morning, Charles County Clerk of Circuit Court Sharon L. “Sherri” Hancock presented the Oath of Office to Officers Douglas, Gray, and Stephens, who are lateral transfers from other law enforcement agencies. “Today, these three individuals took an Oath of Office to serve and protect Charles County communities to the best of their abilities. We are happy they chose to work for us,” said Sheriff Berry. Swann is set to start as a recruit officer at the Southern Maryland Criminal Justice Academy in July and, upon graduation, become a Charles County Sheriff’s officer.

Prior to today, all of the individuals had been finishing the application process. “Each individual has unique experience, which will benefit our police family and the people we serve,” Sheriff Berry said.

Sheriff Berry encouraged each officer to honor the agency’s PRIDE paradigm (Professionalism, Respect, Integrity, Duty, and Excellence). “We are a team here at the CCSO, and all of us take pride in the work we do. We welcome these new hires and look forward to working with them as they serve and protect our county.”