Charles County Sheriff Troy D. Berry is pleased to announce five CCSO officers, along with a Maryland State Police Trooper, were the recent recipients of valor awards and outstanding performance awards by ASIS – an international organization that promotes excellence and leadership in the security management profession.

Charles County Sheriff’s Officer Lamar Hamilton, Corporal William Saunders, PFC M. Nauman, PFC Justin Bottorf, and Maryland State Police Trooper Matthew Milich were presented the Valor Award for rescuing five people from a fiery car crash on September 2, 2016. The driver of a passenger vehicle was traveling southbound on St. Charles Parkway when he lost control of the car and struck a tree. The vehicle burst into flames. One passenger was ejected and the driver, who had a fractured leg, was dragged to safety by an officer. The other officers rescued two toddlers and another adult who were still inside the burning car. The heroic actions and bravery of the officers helped save the lives of the occupants.

Detective Cheyann Harris of the Narcotics Enforcement Section was awarded the Exceptional Performance Award for her tenacity and hard work investigating an opioid-related fatal overdose. Detective Harris’ thorough investigation led to the first conviction in Charles County for manslaughter as it relates to opioids.

“It’s nice when outside agencies recognize the work of our officers. I am proud of everyone who received an award as their actions and work made a significant difference for others,” said Sheriff Berry. 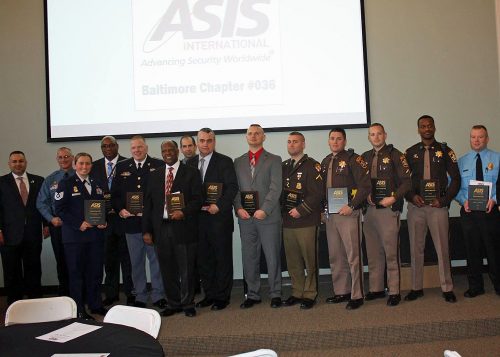