On January 8 at 4:12 a.m., patrol officers responded to the area of Shirley Boulevard in Port Tobacco for the report of a motor vehicle theft which had just occurred. Sgt. T. Yates was near Shirley Boulevard at the time of the call and upon approaching the scene, he observed five cars that appeared to be traveling together, fleeing the area at a high rate of speed. One of the vehicles in the group matched the description of the vehicle which had just been reported stolen. Sgt. Yates attempted to initiate a traffic stop on the stolen car, but the driver fled along with the other vehicles. With the assistance of officers from the CCSO K9 Unit and the La Plata Police Department, three out of the five vehicles were eventually stopped and the drivers and a passenger were apprehended. The two other vehicles escaped and the drivers have not yet been located. A computer check revealed all three cars had been stolen – one from Washington, D.C., another from Prince George’s County, and one from Charles County. The drivers of the stolen cars were juveniles to include a 13-year-old male and two 17-year-old males. In accordance with Maryland law, the juveniles were charged on a juvenile offense report with several counts of motor vehicle theft and theft and released to their parents. The passenger in one of the cars was identified as Tyrell Rashad White, 18, of Washington, D.C. He was charged with several counts of theft and motor vehicle theft. On January 8, White was released by a district court commissioner on an unsecured $3,000 bond with no other conditions other than to appear in court and not engage in further criminal activity. The investigation is ongoing.

Anyone with information about this case is asked to call Detective Pickeral at 301-609-6556. Tipsters who want to remain anonymous may contact Charles County Crime Solvers by calling 1-866-411-TIPS. Tips can also be submitted online at www.charlescountycrimesolvers.com or by using the P3Intel mobile app. A cash reward of up to $1,000 is being offered for the tip that leads to additional arrests in the case. 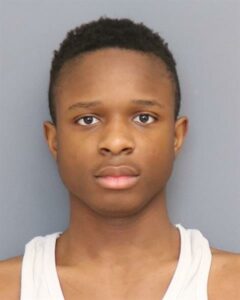