On November 7 at 11:27 p.m., a patrol officer initiated a traffic stop in the area of St. Charles Parkway at Alameda Avenue after observing a headlight out on a vehicle. The driver did not initially stop the car and continued driving for nearly half a mile before stopping. Upon approaching the vehicle, the officer observed three males inside and detected the smell of marijuana. Further investigation showed the driver was in possession of a loaded firearm and body armor. A check of the firearm revealed it was stolen. A check of the driver revealed he was prohibited from possessing a firearm due to a previous felony conviction. The driver, Jacari Trayvell Long, 23, of Waldorf, was arrested and charged with possession of a stolen firearm, illegally transporting a firearm, illegal possession of a firearm due to previous felony conviction, illegal possession of ammunition, and other related charges. On November 9, a judge ordered Long could be released from the Charles County Detention Center as long as he meets the conditions of electronic monitoring. Officer Wedding is investigating. 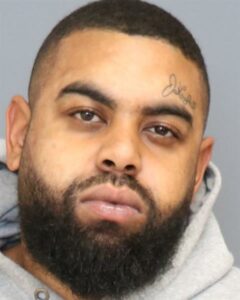