On November 5 at 3:05 p.m., officers responded to the 2500 block of Mattawoman Beantown Road in Waldorf for the report of a burglary in progress. Officers met with the homeowner who indicated they were not sure if the suspect was still inside. Officers established a perimeter and a police K9 entered the house; no one was inside but there was evidence of a break-in. Footage from a home surveillance camera was obtained and officers were able to provide a description of the suspect, which was broadcast.  K9 Officer Willis observed a subject matching the description of the suspect on Route 925 and confirmed it was the person involved in the burglary. An investigation showed the suspect entered the home by prying open a window. Further, the suspect was connected to a burglary at the same house in October during which shoes were stolen. When the suspect was apprehended for the most recent case, he was wearing the stolen shoes. The suspect, Ronal Mardoqueo Montoya Lemus, 23, of Waldorf, was charged with burglary, possession of burglary tools, and other related charges. On November 7, a judge ordered Lemus could be released from the Charles County Detention Center as along as he meets the conditions of electronic monitoring. Officer Knutsen is investigating. 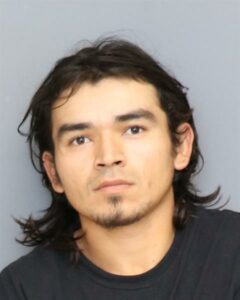