On September 7 at 12:28 p.m., officers responded to a shopping center in the 1100 block of Smallwood Drive in Waldorf for the report of a possible road rage in the parking lot involving a male and a female. Additional calls to 9-1-1 indicated the male was armed with a gun and was pistol-whipping the woman. When the first officer arrived, he located the man and woman at the rear of the center and observed the suspect throw an object into a car. The officer gave verbal commands to the suspect, but he refused to comply, jumped into the car, and attempted to flee. He drove away at a high rate of speed and struck a marked patrol car of a responding officer, totaling the cruiser. The suspect got out of his car and began running toward the victim, who was still in the parking lot. As he was doing so, he ran into a patrol car, striking his leg. The suspect continued running until he reached the woman and grabbed her. Officers were able to apprehend the suspect and subdue him after a struggle. A pellet gun was recovered from the suspect’s vehicle. A preliminary investigation revealed the suspect drove to the woman’s place of employment and shot out the windows of her car with the pellet gun. The woman exited the business and attempted to drive away, but the suspect chased her in his car and eventually blocked her in. He pulled the woman out of the car and began beating her with the gun.

The victim was treated on the scene by Fire / EMS for injuries she sustained during the assault. The officer, who was in the marked police car when the suspect crashed into it, did not seek treatment at the time. The suspect was transported to a nearby hospital after complaining his leg was injured; he was treated and released back to officers. The suspect, Keith DeWayne Nickens, Jr., 20, of Accokeek, was charged with first-degree assault, second-degree assault, hindering and obstruction, and other related charges. On September 8, a judge ordered Nickens to be held at the Charles County Detention Center without bond. Cpl. B. Saunders is investigating. 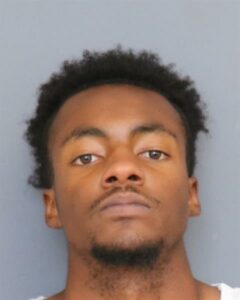