On August 21 at 9:54 p.m., a patrol officer initiated a traffic stop in the area of Cecil Avenue near Kent Avenue in La Plata after observing a traffic violation. Upon approaching the vehicle, a front seat passenger began trying to hide a cross-body bag that had been strapped across his chest. A computer check on the passenger revealed he had an open warrant for failing to appear in court on a case from another county. The passenger, Ricket Deashon Tucker, 30, of Capitol Heights, was arrested. The bag was located and a loaded semi-automatic handgun was recovered from underneath the passenger seat. The gun had been reported stolen in Baltimore City. Further, Tucker is prohibited from possessing a firearm due to a previous felony conviction and a current protective order. Tucker was charged with illegal possession of a firearm, illegal transportation of a firearm, illegal possession of ammunition, and other related charges. The driver was issued a warning. On August 22, a judge released Tucker from the Charles County Detention Center on personal recognizance. Officer Kerlin is investigating. 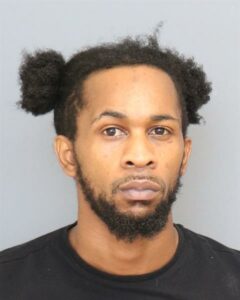