On May 18 at 11:40 p.m., officers responded to the area of Post Office Road near Henry Ford Circle for the report of a citizen robbery. A preliminary investigation showed the victim was walking home from work when he was approached by a male who displayed a handgun and demanded money. The victim complied and gave the suspect his wallet. The suspect removed the money, struck the victim knocking him to the ground, and fled on foot. Officers canvassed the area and located the suspect, Fritzgerald Donald Adorkor, 27, of Waldorf, on Leonardtown Road. He was apprehended without incident. Officers found a replica handgun in his possession. While transporting the suspect to the detention center, he became combative and complained of pain related to a pre-existing medical condition. As a precaution, he was transported to a nearby hospital where he became disorderly and threatened hospital staff. He refused medical treatment and was subsequently taken to the Charles County Detention Center where he was charged with armed robbery, assault, theft, and disorderly conduct. On May 20, a judge ordered Adorkor be held without bond at the Charles County Detention Center.  The investigation is continuing. 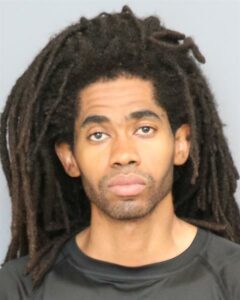