On May 9 at 7:30 p.m., officers responded to Charles Regional Medical Center for the report of a stabbing victim who had been transported to the hospital by a relative. When officers arrived, they learned the victim had actually been stabbed at the Smallwood Park and Ride in Waldorf. A preliminary investigation showed the victim and an unknown suspect were arguing in the parking lot of the Park and Ride when the suspect stabbed the victim with an unknown object. The victim’s cousin, who was nearby, drove him to the hospital where he was treated for injuries and later released. This information was relayed to a civilian Police Communications Officer (PCO) – a police dispatcher – who then took it upon herself to immediately review footage from a surveillance camera that covers the Smallwood Park and Ride parking lot. She was able to find the assault on the footage she reviewed and provide officers with a detailed description of the suspect including the clothing he was wearing. Officers canvassed the area and spoke with witnesses. Several hours later, a bus driver, who was aware of the assault, observed the suspect and notified the police. Officers responded to the Park and Ride and located the suspect, who was still wearing the same clothing he wore when the attack occurred. The suspect, James Pernell Knott, Jr., 27, of Indian Head, was arrested without incident. “This was an outstanding arrest in that the police dispatcher took quick and immediate action on her own in an attempt to identify the suspect. The bus driver followed through by calling officers when he observed the suspect in the parking lot the next day,” said Sheriff Troy Berry. “ Due to the teamwork, a dangerous person was quickly apprehended,” Sheriff Berry said. Knott was charged with first-degree assault and second-degree assault. On May 10, a district court commissioner ordered Knott to be held at the Charles County Detention Center without bond. 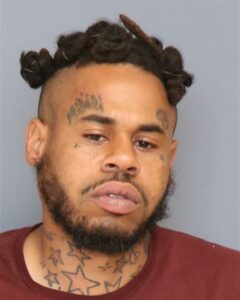