On May 1 at 9:47 a.m., officers responded to the area of Western Parkway near Millbrook Court for the report of a hit and run motor vehicle crash. The driver of the striking vehicle fled before officers arrived. As officers were responding, they received a call that a man had jumped out of a car at the Market Place shopping center and fired multiple rounds at the front door of a bank. The suspect then entered the bank, which was closed and unoccupied, through the shattered doors. Officers from the CCSO, with assistance from a Maryland State Police Trooper, began to set up a perimeter around the bank when the suspect emerged from a rear door. He removed a gun from the front of his waistband and transferred it to the rear of his waistband. Officers ordered the suspect to stop; however, he continued walking away toward Western Parkway. Officers were able to deescalate the situation and took the suspect safely into custody as he neared the roadway. The officers recovered a loaded semi-automatic handgun from his waistband. In addition, the officers were able to link the suspect to the crash which the investigation revealed he may have caused intentionally. After the arrest, and as a precaution due to the hit and run crash, the suspect, Zakee Rasuul Martin, 25, of Waldorf, was transported to a hospital where he was observed for any injuries and released. He was then transported to the Charles County Detention Center and charged with assault, destruction of property, burglary, illegally transporting a firearm, numerous traffic violations, and other related charges.  He is currently being held pending an appearance before the district court commissioner. No one was injured as a result of the crash and subsequent arrest. Anyone with information about this case is asked to call PFC Chambers at 301-932-2222. The investigation is ongoing. 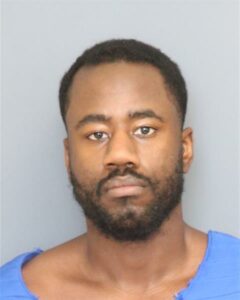