On March 29 at 10:19 p.m., officers responded to a carryout restaurant in the 11900 block of Business Park Drive in Waldorf for the report of a disorderly person. When officers arrived, they observed the suspect on top of a table throwing pots and pans at employees as they fled from the business. Officers were able to apprehend the suspect. A preliminary investigation showed the man was asked to leave when the business started to close for the evening. The suspect refused to leave and began destroying computer monitors, a camera system and he threw food and objects at employees. He also attempted to spit on two employees of a nearby business who came to help the employees of the carryout. Darryl Anthony Hall, II, 36, of Princess Anne, MD, was arrested and charged with assault, disorderly conduct, destruction of property, and failure to obey a lawful order. On March 30, a district court commissioner held Hall at the detention center, but he can be released after paying 10% of a $3,000 bond. The investigation is ongoing. 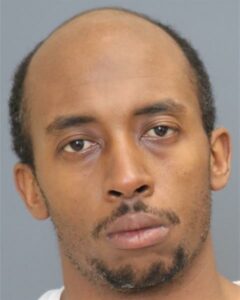