On March 11 at 6:41 p.m., patrol officers initiated a traffic stop in the area of Charles Street and Church Street in La Plata. Upon approaching the driver, the officer immediately observed a firearm on the dashboard. The driver, Jamaal Khali Sterling, 22, of Virginia, was arrested. A loaded semi-automatic 9mm handgun and another firearm were recovered from the car. A loaded magazine and suspected marijuana were also located. A computer check revealed Sterling is prohibited from possessing a firearm due to a previous felony conviction. Sterling was charged with illegal possession of a firearm, illegally transporting a firearm, driving on a revoked driver’s license, and other related charges. On March 14, a judge ordered Sterling could be released from the detention center on a $20,000 bond. After paying 10% of the bond, Sterling was released. The investigation into the recovered drugs is continuing. 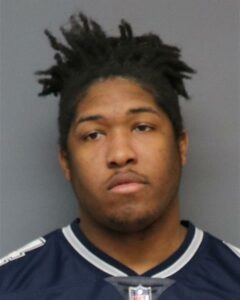